All of the above led to this link..........
This is an excerpt that seemingly "connects the dots".

There are two emotional values, or "poles," and just like terminals in a battery, only when these are connected can the emotional juices flow. The flow of emotion as energy is what calms, not the mental transmission or reception of a so-called signal.

Just as a conversation can't happen if both people talk at once, emotion can't flow if both individuals are occupying the same polarity………..The preyful polarity (+) is the one that absorbs energy as in the one licking its lips (or any other act of ingestion). When these polarities are clearly defined between two individuals (and they can flip from moment to moment), then the emotional circuit is connected and emotion can move between them. Both individuals feel good because they feel connected to each other and their movements and manner induce a feeling of motion and grounding within each other................

Translation.....we are "in tune" and "the tongue shot" is a physical signal from Pounce that "Everything is fine...and I'm good to go."

I would never have discovered the "epiphany" without multiple photo hints.

Where does this fit in with retriever training? Essentially, responsiveness is
a desirable trait to develop. When a pup is focused...teaching and training are
more effective. At a very young age, most pups are ready for a healthy, rewarding  relationship. Doing what a young dog needs "in the moment".....early on, enhances
the trainer/dog connection. If this natural, early window of opportunity is missed
it may be more difficult to reinvent.

Hillmann's "The Game" concept was magical when it became the primary focus in
the beginning. Fun and excitement heightened the natural "emotional" connection. 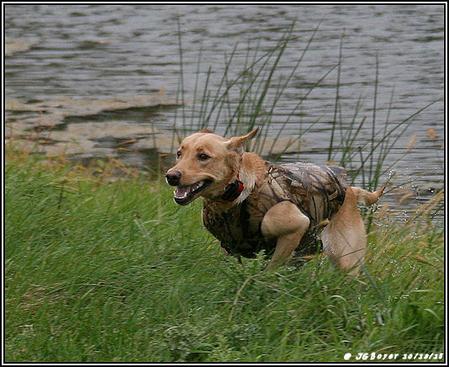 signal that Pounce's "Off Switch" is engaged

Why Do Dogs Lick Their Lips? (link) 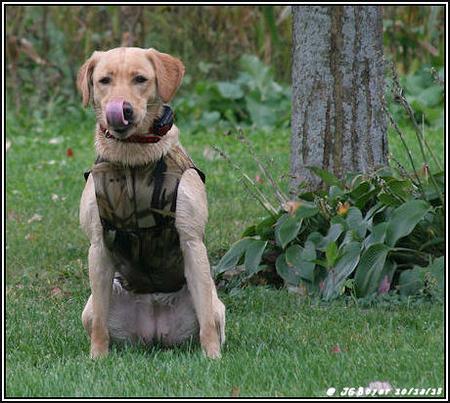 In December of 2014, a photo "surfaced" from a series of burst mode "takes" when Pounce was attempting her first efforts at remote, "stand alone" singles. The following months, several more photos of this nature appeared because a camera was almost always part of our training gear. Training alone while "handling" a retriever and camera at the same time became almost seamless. Often times there were literally hundreds of photos to scan and searching for the unique "tongue shots" became a regular quest. Timing was everything.

Fast forward to January 2015 and the desire to know why ended with doing a "Google Search" typing "Why do dogs lick their lips?" The inspiration to do so was motivated by writing a thread revolving around "The On/Off Switch". Most all the images revealed a tongue display right at the moment of release. Was it a physical expression of a conditioned response? What was the connection (if any)?

Recently a question was "posed"... How's my dog's "on/off" switch? (and somewhat answered).  I do see signs that Pounce may be "wired correctly."

updates: A recent thread had a post where this reaction "at the line" was observed and recorded in a video. The trainer's comment/analysis is

"I interpret tongue-flicking as a capping of drive, ready to go signal."

Another quote from the same thread.....

"It means, I'm on board with you Jim.....a team player ready to take your cue. Test it on any dog....tell them to sit or stay. One that will obey/comply will stick out their tongue right before completing the command.

True deal, a telling sign that is so obvious and so many trainers never even see it."