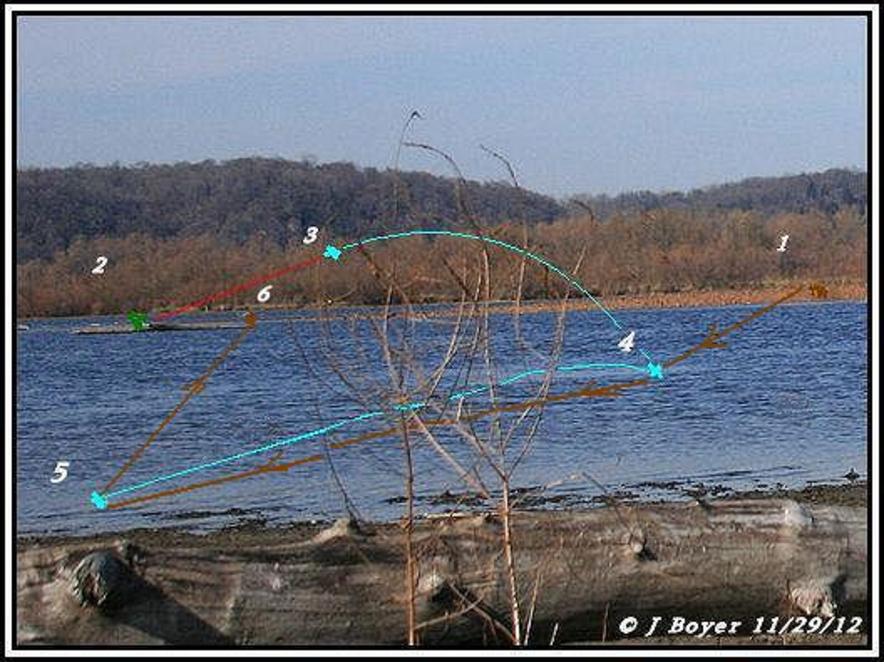 note: The above is a slightly edited version of the original journal entries recorded in 2012.

There was one day during this time frame that ended with some difficulty. Here's "The rest of the story". Hunting alone can be an adventure....some good and others "not so much".

That day nearing sunset, my phone rang three times. I've learned answering can mean missing shots and figured it could wait a few more minutes. When the sun went down, I called back. My friend and his Dad plus a guest were hunting down river about two miles away and his motor would not start.

So the plan was I'd finish picking up and they would do the same. He'd then push his boat out into an opening in the islands where they had been hunting and have a light on. I knew the area well so finding them would not be an issue.

I loaded my small sled with my gun, gear bag (camera, shells, etc,), decoys, dog hide, three ducks and dragged/floated it back up the shoreline to take a right turn out into knee deep, mucky water. Then there was the long, slow, wading walk to the boat. My mud rig was moored about fifty+ yards from the shoreline (couldn't get it any closer).

Gunny was nearby and headed out with me. He was busy playfully lunging about when one of those "in slow motion events" started to evolve. I saw it coming and reacted too slowly as Gunny came bounding and lunging in the water toward the floating cargo. The "Oooohhhh nnoooo!" moment seemed to last an eternity.

As he jumped up on the floating, loaded sled, I leaned forward to try and knock him off stride just as everything switched back to full speed. Too late, the sled immediately swamped and sank. Since the water was only knee deep, it was just stuck right there. I stumbled and went into the water catching myself with both arms plunging into the water and "mucky" bottom. Of course my coat and every pair of gloves were now wet because I had been sweating and just piled them on top. I could not budge the sunk, water loaded sled.

Throwing the bag of decoys out, I headed back to shore with my gun and gear bag both of which had been under water for a short time. Did I say it is cold and getting dark quickly?

After the first trip back to the bank, I called Brian and gave him the "good" news. Two more trips had everything back on shore (except for the decoys). I tipped out water from the sled (it was full) and reloaded it. My hands and arms were getting COLD. The "saver" was that I was wearing breathable chest waders. A big dose of adrenaline kept me going as my mind raced at doing the right things to minimize the damage.

First, I cast Gunny to the boat.....which in retrospect I should have done in the first place. When he was IN the boat, I left the bank towing the soaked load. After dragging the "soggy mess" back out, it was tossed into the boat. Then I went back to retrieve the bag of decoys. I could not find my Avery dog hide and one duck.....never did.

Then much to my "joy" (not) I discovered the river had gone down a few inches which meant I had about 100 yards of the sand bar to push my boat over to reach deeper water. It's now dark and I didn't realize why until later. My running lights were on, but I had forgotten I was wearing sunglasses (which made it seem even darker).

Going north and coming out around a point of the island, I headed south into the main channel of the Mississippi River. It wasn't long before I spotted a light in the area where Brian was supposed to be. When I got very close, they began telling me how good it was to see my lights come out around that point. My only reply was, "I really...,REALLY need some warm gloves."

We had a very slow, up river tow north to the launch, but with zero wind it was uneventful. Wet sleeves and soaked down to my waist with no overcoat made it seem even farther. It was near freezing and dark when we got back to camp. The furnace in my "duck" trailer never felt so good.

The gun, camera and my new electric heated gloves (not designed to get wet) were dunked. The gear bag was half full of water. My mallard decoys were also full of water (not sure why) and everything else in the boat was soggy. I knew if I didn't unload everything right now the morning would greet me with a giant frozen mass. Two picnic tables were draped with "stuff".

I spent the night drying things out and stripped my gun completely down. The camera and lens went into two sealed bags full of rice. The humidity in my trailer was really high all night.

The new electric gloves were eventually salvaged, but the camera wasn't. Losing my Canon Rebel really wasn't that big of a deal in the grand scheme of things. Yesterday, I ordered a used camera like the one I lost and a Pelican waterproof case (lesson learned). The lens was OK.

Days like that make for interesting story telling later on while rendering most other hunting and
training issues seem like "small stuff". I felt then that since I was 72, the "event" was kind of like a
reminder that the old "geezer" has still got it. (However, that was eight years ago.)

The old saying "That which doesn't kill you makes you stronger." came to mind. I would frankly prefer not to test that theory very often because the alternative is permanent.

Point #1 is Gunny's hide. I was on the log at point #2 and shot a drake greenwing at #3. The duck fluttered down to land at point #4 too far away for any follow-up shot and was swimming.....not good.....but I gave Gunny the “call”. He had lunging water for awhile...then in the middle of the channel deeper swimming water. For a moment, the distance of the fall became a bit confusing so I handled him twice. Then the duck flexed its wings and there was a flash of motion. Gunny saw it. As he zeroed in on making a retrieve closer to the shore (where it was very shallow) he pounced, but the duck jumped up and flew off. My heart sunk for a moment knowing that Gunny had put a huge effort into this attempt. Then suddenly, it landed about 75 yards away.....nearer to the shoreline. Gunny was at full speed after it and pounced again. At point #5 his successful retrieve had me giving a mental “Tiger Woods' fist pump”. Gunny delivered it to me back at the log (point #6) and I know “Good Boy” was said several times. He returned to his hide and I to my spot on the log.....still thinking “Wow! That was "so, so cool.” It was our only shot and retrieve for the day.......but I really didn't care. What a retrieve!

​Nov 29 The day was "slooower" and almost nothing was moving. I had taken a dog hide to position Gunny remotely and more out of sight than yesterday's setup. With fewer decoys, the setup was right by a solitary, well river worn tree and nothing was flying anywhere near it. Looking at the next island to the west, there appeared to be a large log sitting off the end which could be a neat place to setup. Also, farther up the shore to the north ducks were dropping in. The plan was to take a closer look at this island the following week. It was scouted and the next morning Gunny and I packed in (loaded sled from the boat) to setup on the east end of that island. Ducks were working, but they seemed to prefer setting down nearer to the west end of the island.....in the area of the log spotted a few days before. I moved to the log and Gunny was placed about 125 yards remotely (from the log) on a piece of plywood apparently left by other hunters when the water was higher). It was a good move. We ended up with two greenwing teal and a mallard. I was extremely happy with how Gunny adapted to the change (remote hide).

The next morning we returned. This time I brought along a dog hide to place on that piece of plywood. The log was rather unique in that I could sit/straddle it while at the same time there were two branches in front of me that perfectly cradled my gun. The water was about knee high with a fairly firm sand bottom.

This morning, it was very "slooow" and almost nothing was moving. Those ducks that did had decided another 300 yards farther south was a better place to be. If I had eyes in the back of my head there were two chances that could have produced a shot or two......but I don't. Then it happened. Two greenwings came speeding overhead and I managed to swing on the second one. It was not a clean kill and the duck fluttered out over the channel in the direction of the spot we had hunted the week before. The distance between the two islands is 200+ yards. The following picture was taken from that far island (where we had previously hunted) and used to show the sequence of the spectacularly challenging retrieve that Gunny made.

Late Nov slow day, only three birds came close enough, two greenwing teal and a mallard (new  spot on Iowa side)... but one greenwing teal "situation" the next day ended up being the best retrieve one of my dogs has ever made (a great day). Gunny sure did his job - best year for teal.These last two weeks in November proved to be interesting. Duck camp is on the Illinois side of the Mississippi River. However, my dogs and I hunt both sides (Illinois and Iowa licenses). I scouted an area on the Iowa side of the Mississippi that looked promising. However, hunting required "packing in” with my Predator blind as a sled (over land and across shallow water). On one hunt, Gunny picked up five ducks while shooting out of a layout. Shooting from that blind continued to be a challenge. On the previous day, my 13 year old, Taffey, picked up two greenwing teal. It was a good two days. (dates correct on photos)