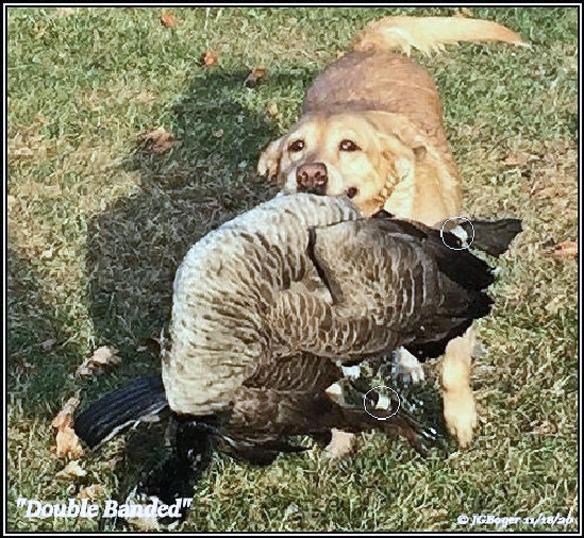 It’s been about eight years now since number two. I manged to capture a few photos of geese flying or loafing on ice with bands…..but nothing "magical" to report.

However, this late season of 2015, the geese were “visiting” again and Kooly was retriever for the day. He is now going on thirteen years old. Not knowing exactly how many hunts he had left in him and having a mild day found us waiting......for the magic.

The camera was poised and Kooly did his thing with a goose…..and it was banded! plus we filled out an Illinois limit shortly thereafter. The excitement was building when editing the photos. I was in luck. One leg was sticking out with the band in full view.  Number three was very cool for an old retriever named Kooly.

After searching through the I-Phone photos of Pounce retrieving the double banded goose, one distant shot revealed both bands.  note: It is heavily cropped and edited. 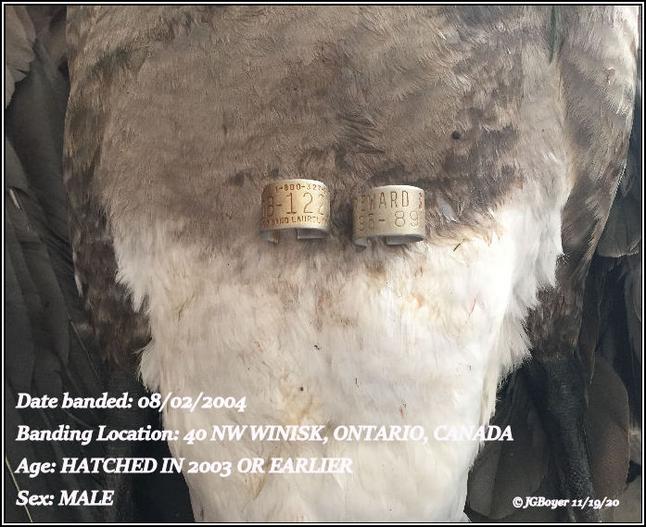 I was very late into hunting waterfowl. After many years of hunting rabbits and squirrels, I decided to begin hunting ducks. A free (not purebred) Labrador was obtained via a local newspaper and within a few months we began “learning on the job”. Being naive made it seem more fun for Lick and I.

Then our three children became more of a challenge and hunting was not in the picture for several years. Fast forward many more years to young Grandchildren and the urge to take up an old habit surfaced again. This time a $50 feed store pup was soon “learning on the job”. Lick II was better than Lick I.

As Lick II got older, training was taken to an entirely new level when I bought a pup with a pedigree. She eventually became HRCH MPR UH Kwick Taffey of JoeMac’s MH.

Around that time, I was now in my early sixties and added two more Labs (one was a pup out of Taffey). Then it happened. A friend invited me to go along on a trip to North Dakota where I shot my first goose. Immediately, I was bitten by the goose hunting bug.

It wasn’t long before everything fell into place 1) good dogs, 2) an ATV, 3) followed by one big, aluminum decoy trailer and 4) permission to hunt a farm nearby (with a pond) that always seemed to have an X. Goose hunting can be extremely addictive. The sound of geese in the distance announcing their arrival is always somewhat magical. And not soon after Daisy brought me my first banded goose. She seemed to find it interesting, too. It was her very first goose!

I could not wait to call my close friend and relay the message (brag). I was a bit deflated when he informed me that they had been recently banding geese locally in northern Illinois and it was probably one of those. I was a bit disappointed, but not much. However, when the “return” came in it was good news.

The next year was even better in terms of skill and numbers. Hunting alone and putting out a lot of decoys did not seem like work…….and we were on the X often. The following year another banded goose was retrieved by Daisy.  During this time my camera skills were getting on board with the hunting "program".  I got lucky with a photo of Daisy bringing the goose back with a leg (left side of photo) “showing off” our second band.

Five seasons later, the settings have change some. Kwick Labs are now Pounce and Gigi. And the human KwickLab is 80 years old. The Thorson Pond goose blind was moved to the south shoreline and away from the tall, dying pines on the north side. Goose hunting has gone well considering my age and shooting left-handed became necessary, but not an issue. Up until this past week, Pounce had retrieved six geese and Gigi did her first. In the
next few weeks it will be time for ice out. However, the blind is working out well and my shooting has been pretty good. Yesterday, was the day of magic. Pounce ended up retrieving a delayed triple for another Illinois limit. However, this entry would not exist if there were not any bling to discus. To be brief, a good sized group of geese dropped in and Pounce picked up three geese.....a double plus a blind. The second goose of the double was double banded. One band was from Canada. The other was a $100 reward band.  I received my initial report from the USGS. The male goose was old and banded in Ontario.