Feb 1 Saturday - Gigi and Pounce were "on the road" at dawn for the twelve hour trip to Clinton, Arkansas. The forecast for tomorrow is sunny with a high of 70°F.
Feb 2,3 The last five days have been productive. With no dogs to train and realizing that the challenge of getting Pounce's AKC Master title and having success with Gigi in AKC derbies will require serious modifications in my training and thinking skills. It was a challenge to come up with an inspirational plan "out of the blue". However, there is a way. Years ago, I was fortunate to have had some input from a talented trainer. I had forgotten about her insight. After an intensive search on the WayBack Machine, the information was "retrieved". I have two months to develop a plan.
note: The original plan for sending Gigi south with Pounce was having surgery on my right

shoulder. The doctors finally concluded it would not be necessary. With both dogs
gone for two months, physical therapy has been a huge focus. It involves rest and
regular exercise in our heated swimming pool. Progress has been encouraging.
Feb 4 The weather is much better in Arkansas (no snow, warmer). The first step for both was adjusting to "truck life". The second was learning that "commands are not optional".
note: The next several weeks will be spent planning on how to deal with "command" issues
(revolving around "responsiveness, focus and control").
note: Pounce and Gigi will know what that looks like after two months with Corey. They will
need to see that from me when they return in April.
Feb 5-6 some snow, rain and mud....not normal - warmer than usual
Feb 9-10 4+ inches of snow - hibernating & doing therapy for shoulder note: Website issues were eventually solved by moving to Chrome as the browser. Viewing and especially editing "fell apart"

on the "other" Browsers. This WEB is being archived (stored forever) on the "WayBack Machine".
note: The scrolling technique becomes necessary when any page/link is transferred/stored.

Feb 12 With both dogs gone for two months, the routine has drastically changed. Today was spent "going back" and looking at old journal entries, editing the KwickLabsii website for errors and creating a few new pages.                                          and
Feb 17 Weather in Arkansas has been wet and colder than normal....both dogs seemed to have adjusted to truck life and regular training. Pounce had a brief issue with a probable spider bite
which was effectively treated including a quick trip to the vet.
Feb 21 Arkansas continues to be colder than normal. Pounce and Gigi are both very "watery".
Pounce did quite a bit of goose hunting before the trip and all her retrieves were from very cold water. Therefore, cool water training in Arkansas will not be much of an issue. An optimistic plan
is Master tests in the spring with Pounce and a Derby (or two) for Gigi in the fall.
Feb 29 The regular Facebook photo entries from pro trainer Corey Zandonai often provide a quick snapshot of the daily training setups. It is said, "A picture is worth a thousand words." 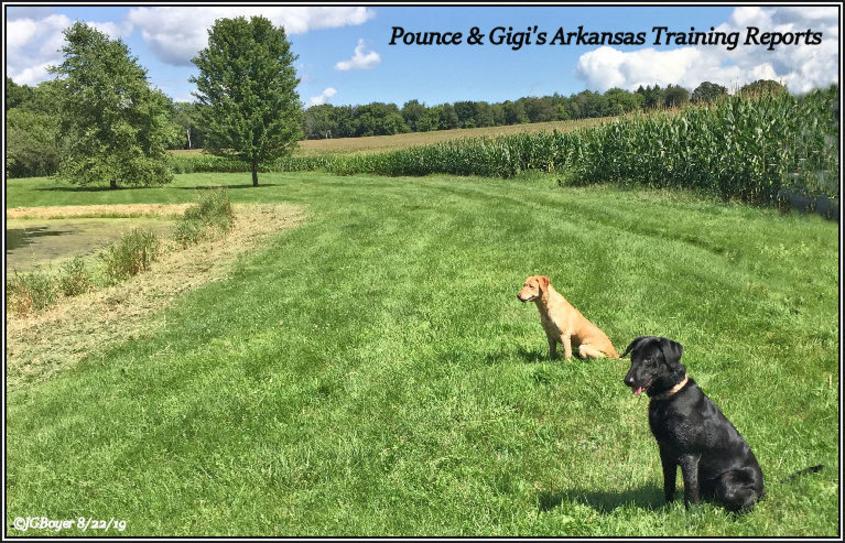 Mar 1 "Leaping" ahead, the decision was made to make this a two month training journal.
note: Recent data indicates record high temperatures for the past winter.
​Mar 5 At the end of March, Pounce and Gigi will come back from a two month trip south for training. It is too cold in the winter "up here" and that extra two months of training will be significant. I had originally planed to purchase a UTV to aid in training. Since I train alone most of the time, getting ready for Master tests with Pounce and possibly a few AKC derbies with Gigi, the setups ​will be not simple. I have many excellent training areas. However, driving right up to the locations of stations is not allowed. Therefore, it is either walk out and back with wingers or use a UTV (which will be very  expensive. There are alternatives. The most obvious is to train with a group. However, there are two issues with that. The first is it will be a much longer time spent each day. And the second is setups will often not be specific for my retrievers' needs.

I calculated that walking and carrying would save quite a bit money. My labor would amount to saving about $40 per hour and provide exercise.  The only negatives would be that training will take more time (without the UTV). Surprisingly, the cost analysis indicated saving several thousand dollars because I work for free. The main issue will be complaints from my 80 year old body. They say exercise is good for an "old person". It won't be long before that theory is tested.
Mar 7 going to first see how walking "in and out" works....then maybe a gas powered golf cart

note: There have been no training updates for the last eight days, but going with
the thought that "No news....is good news." (refer to March 9th entry)
note: In a little over three weeks, Pounce and Gigi will be back home.
​Mar 8 developed "rough draft" of spring training plan for the next three months
Mar 9 There had been a several day break in how training was progressing with Pounce and Gigi.
Today's phone call explained why. A deer hit the side of Corey's truck and catapulted through his
driver side window - concussion and broken nose. Yikes!!! Pounce and Gigi were able to continue training because Tracey drove down to keep things going. Pounce is training really well and will
be ready for master tests.         Gigi is beginning to show signs of getting past her immaturity.

Mar 11 Pounce is entered - AKC Master test - Backwater Retriever Club 2020 Spring Hunt April 4
Pro Corey Zandonai is handling her. It is a double Master and both filled in a few hours. Pounce is

entered only for Saturday. I am getting kind of anxious about having them back home. However, the time off has been useful. The indoor swimming pool has provided a great deal of exercise for the shoulder issues. The plan to avoid a replacement has worked. However, I had no idea how difficult it would be to build muscle strength when almost 80 years old.
Mar 13 Well, it is getting more interesting by the day. Lylah's school will be closed until the end of March. There is a tentative plan to introduce a mandatory E-School run by the parents at home.
Mar 14 In a couple of weeks Pounce and Gigi will be back home.
Mar 22 I have been out of the house just twice in the last 12 days. Both to a nearby small, hardware
store for some plumbing parts. After looking at the Hunt Secretary site, every spring HRC hunt test has been cancelled. Pounce is in to run an AKC Master test the first week in April. However, the vast

majority of AKC tests have been cancelled. We will begin training for possibly something in the fall, but may simply transition to a hunting season.
​Mar 23 The Master test that Pounce was entered in has been cancelled (falling in line with all the others). There will not be any testing for quite some time. In the grand scheme of things, hunt tests are rather insignificant. The bigger "game" becomes hunkering down, not getting exposed and
focusing on survival mode. Corey's plan to transfer the dogs when they arrive back up north is
excellent. On April 4th (Saturday), everyone will have a time slot to pick up their dog(s) at a Madison Retriever Club property. Each dog will run (train) on a setup and Corey will demonstrate where they are at in terms of performance. This will make for a smooth transition back to home base.
note: twelve more days and counting followed by a very long stretch of JUST training
Mar 28 Just a few more days!!! wingers are ready and batteries charged....Our income tax was figured out and transmitted way earlier than normal. The so called tax break last year has not been a boost because over the years our finances were tailored to deductions that were favorable. The tax increase of $5000 has been disappointing. At least the delay in paying until July 15th helps.