May 2 another day like yesterday with cloud cover moving in...It was very pleasant...I checked the

Winnebago County Four Lakes DTA and it is now open. Drove a few miles to the Harrison Road DTA and pro Corey Zandonai was just finishing up. After he left, the setup was three remote wingers with ducks that Corey gave me.          Gigi was to run three singles, but I forgot to take the safety off the middle one. Daisy ran a triple with a blind up the middle (smooth and fast). Gigi came back out to run a double and had a big hunt on the memory bird. Five of the ducks were wrapped in paper and placed in the bird freezer. The new Gunners Up winger needs some "adjusting". The Dogtra Remote does not have the "thing-a-ma-bob" that keeps it locked in place and the hinge bolts are too tight.
Using the van to setup and reload was not an issue today. Driving in the grassy areas with the van will not work well when it is muddy or the grass gets thin. An alternative is possibly in a month. I am too old to walk much when doing big setups. Loosing thirty pounds is more difficult, but does not cost as much. 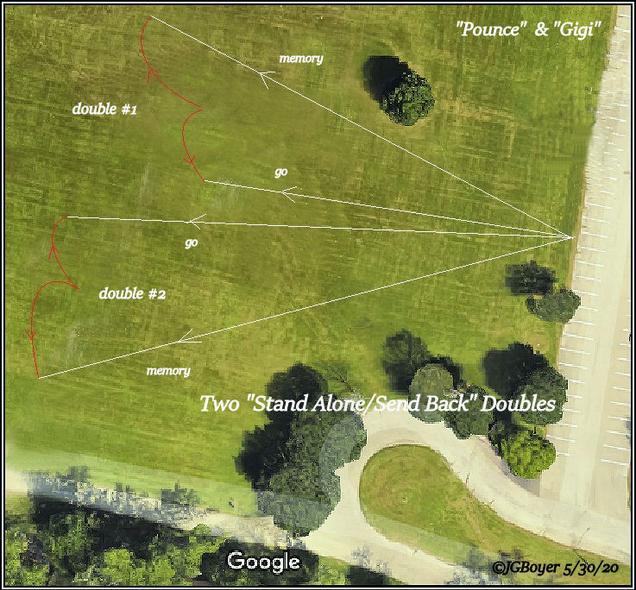 At 5 pm both dogs had another training session. Gigi worked two piles of Dokkens with
a focus on the "no command procedure" which is a technique practiced in D.L. Walters book "Training Retrievers to Handle".  Pounce then came out to work on her body fat issue by doing three stand alone sent "way out" singles. Short session in total time, but accomplished what was needed for two dogs that had been "laid off" for three weeks.
May 31 Sunday - train in the same area......Gigi and Pounce did two sets of doubles similar to yesterday moving the line farther north and throwing longer marks. Gigi went first. After Pounce ran her two doubles, Gigi came back out to work two piles practicing D.L. Walter's "no command procedure". Lastly, Gigi did a brief session practicing her whistle sit skill when returning from a remote sit. We are making steady progress.

May 1 66°F for the high - definite training day - each did a set of eight "stand alone/send back" singles (Gigi's were 30-40 yards longer). Gunner (me) used a goose call and shot primer shell reports from a single shot shotgun. This was at the Harrison Road DTA and we were in and out quickly. Gigi was blowing hard when she finished, but the van fan and a drink of water cooled her quickly. Both ran hard and fast. The decision to pass on an evening of "yard work" was easy.

May 29 Warm and moist conditions have cover jumping out of the ground.  Mowed the lawn three days ago and it needs a repeat. Pounce and Gigi began regular exercise after their three weeks of "Doxy" trreatment.....OB session and running a simple pile for exercise....blowing off some steam
note: UTV will be picked up in a few days - winch plus plus other ad-ons to be installed
May 30 Saturday - early morning we did some OB/heeling in the driveway...mid-morning it was 71°F
and sunny with a slight breeze (very comfortable)....Pounce and Gigi ran two "stand alone/send back singles" Both did this session fast and easily. The primary focus was to work on getting back up to speed with their conditioning.  I was impressed with how well Gigi remembered this routine.

May 28 the last hurdle with the UTV was solved. The trailer is 6'6" tall inside which is enough to deal with Kawasacki UTV height. However, the door jam to the trailer drops down below the height of the UTV. It appeared this was going to be a terminal issue with a smaller UTV being necessary. The trailer salesman suggested all was not lost. The ramp drops the rear axle rotating the UTV temporarily dropping roof line of the UTV (so he said). The math analysis checked correctly. This morning the physical experiment was a quick and simple success...in with room to spare. What a relief!!!
note: inside height of trailer = 78".....UTV = 74.4" (plenty of room once inside)
door way header = 4.5" reducing door height to 73.5" (opening)
the front of the rollover cage cleared beneath the header by about 2"

ay 3 Sunday - day off for Pounce and Gigi....KwickLabs will be doing real yard work and making some adjustments in a new Dogtra remote mount on the new Gunnners Up winger
May 4-9 The focus will be on getting the house ready for an appraisal. Pounce and Gigi will do daily training sessions in the yard ONLY. There will be no journal entries.  On the 6th, Gigi vomited in the airing yard (afternoon). She began taking Doxycycline Cyclate for the next three weeks with a very light exercise regimen - Lepto. This evening, Pounce would not eat at first then picked at it slowly
and ate very little. Afterwards, she was laying still on her side and panting. Her temperature was only 101°F. Sent a message to my Vet late that night. Pounce did not eat this morning (the 6th) and after discussing the situation with my Vet, both are now taking "Doxy" (twice a day) for the next several days.    note: Pounce Vet appointment - 1:50 pm May 13th - Wednesday - Edgerton Office
May 10-17 Pounce & Gigi are getting bored with the no training routine. Exercise is limited to airing and some light OB. According to a pill count, we have nine more days to finish off the "doxy" pills. The last five days of May we will get back up to speed and begin regularly planned training in June. Gigi is looking good and growing into her full size while Pounce looks a bit pudgy (cut food some).                     note: Between not training and finally weaning off the dog training threads, there is
now more time for planning. Getting old is a pain in the knees and other places.
May 20 went to the trailer dealer to pick up a Stealth Mustang 7'X12" enclosed cargo hauler.
May 26 Tuesday - lock in the purchase of a 2020 KAWASAKI MULE PRO-MX EPS. Today is the last dose of Doxycycline for Gigi and Pounce. Tomorrow we can begin field training....again. It will be good to see some of their energy put to a better use. The last three weeks went by too slowly.