Aug 12 Wednesday - high in the low 80's - weather is OK for training.......but a day off seems more useful
Aug 13 Thursday - high middle 80's - trained in the afternoon and Lylah went along for the trip. The first stop was at the Stoughton property. Gigi ran the point blind she learned on Tuesday. It was setup the same
way as far as distance. However, the UTV was staged back to using only three lines. Gigi lined it fast and precisely. Pounce lined it perfectly from half-way and then the full distance. This was after not running it for two years. The equipment, dogs and UTV were loaded up quickly and a short drive to the Gallagher Field Trial DTA soon had Gigi working on the swim-by pond. She lined back and over piles and then did a few over casts. The grass around the swim-by pond was trimmed short which made it much easier to train on. This session was very productive. She will be back (no pun intended) for more practice.

Around 1 pm it was in the mid-70's when Lylah and I loaded up Pounce and Gigi for a training trip to the Gallagher Property (field trial grounds). The plan was to teach Gigi her second point blind. The line to a distant mound had a double water entry. Her first land point blind provided a clear view of the destination from beginning to end. This double entry water point blind had the destination disappear from view twice (because of the water entries). Teaching a retriever to remember disappearing "targets" tends to awaken their memory capabilities. In a way, this was kind of a test to see how Gigi would respond and some confusion was expected. She kept trying and became more responsive as the session progressed. By breaking it down into segments, we eventually ended up running it the full distance. It was interesting to see the short segment "aha" lights go on as we built this point blind. This was her second point blind and it was much more challenging than the first. Disappearing destinations must be supported by utilizing memory genetics. That potential must be awakened and nurtured. Today was an excellent beginning.
note: The UTV continues to be a great motivator for taking Lylah (our autistic granddaughter)
and it makes a huge difference in what a 80 year old man can attempt to do.
​          note: Pounce ran the blind and had no issues with it (especially, since it was a 125 yard cold blind
from a recent training trip to this area). (Pounce is yellow and Gigi is black.)

In order to keep training from becoming a compulsive disorder and the simple fact that we will not be attending any tests this year, I am finding it is much more relaxing for everyone (family and dogs) to take regular breaks and do something else. Tomorrow is a day off......from training.

Aug 7 Friday....no training....day off for everyone....did some yard work - mowed the lawn
Aug 8 Saturday - somewhere close became morning session in the yard - the setup was a combination lining and handling drill using a dozen Dokkens - The first phase had Gigi staked out observing Pounce's session. It was 12 Dokkens (6 lined to a left side pile and six to a right). The Dokkens were replaced and they were picked up again with angle back casts off a placeboard (alternating angle back left and right casts). Then Pounce was staked out and watched Gigi practice the same thing (24 reps striving for precise reps so as to produce reliable conditioned responses). In addition to lining and handling skills, another
set of "reps" at the line - returning to heel, sit, hold and delivery skills are continually being polished. This is especially significant with Gigi. Being dynamic, excitable and aggressive has become more focused and under control. The afternoon high in the upper 80's will find us cool and resting in the air-conditioning. ​

came along to learn how to be an assistant. Lylah is our non-verbal, autistic granddaughter and had a good day helping out. She definitely likes to ride in the UTV. We setup three inline singles for Pounce and Gigi. The following Google diagram reveals the planned set of four. White stickmen were at each winger station and
launched Dokken mallards. Pounce is more than ready to run master tests and Gigi actually marked better on this first set of singles. Lylah did a really good job of shuffling "stuff" to and from the UTV plus helping in loading the wingers. However, riding around in the UTV was her favorite part of the day.

Aug 9 Sunday - up early...already close and muggy - hot in the afternoon = day off for all

A recent forum thread topic was about the value of Hillmann's program. As usual, very little was mentioned about the abilities of a trainer utilizing that program. From a retired teacher's view, it is important to accept that the manner in which one reads, studies and learns how to process information varies......considerably. Critical thinking is the intellectually disciplined process of actively and skillfully conceptualizing, applying, analyzing, synthesizing, and/or evaluating information gathered from (or generated by) observation, experience, reflection, reasoning or communication. That requires quite a bit more than just processing.

In simply terms, training an advanced retriever is more about the student (retriever) and teacher (trainer) relationship (which is rarely quantified, analyzed, discussed or modified). The above perspective explains why how to train a retriever is much more complex than defining it simply by the name of a specific program. Peddling as fast as one can may simply not be enough.
​​
Aug 10 Monday - day off, muggy with a thunder storms and tornado watch high in upper 80's
"stuff" to work on in August (early goose season Sept. 1st)
begin Hillmann's 5 Point Star Drill with Gigi (finished with the three point)
take the swim-by skill set Gigi has so far to the Gallagher swim-by pond ✔
continue the sequence of inline singles with both dogs ✔
practice Gigi's double entry/exit water point blind ✔
setup second, land point blind at Stoughton DTA (long) ✔✔

yard work (lining & OB practice) every other day (maybe) ✔
build goose blind on Thorson Pond soon (season opens September 1st)
Aug 11 Tuesday trained at the Gallagher FT property - Walsh Pond....Pounce ran three singles and a blind. Gig ran the three singles. Then on the way home we stopped at the Stoughton FT property. Gigi ran a long point blind on the west side of the property. This was her first day. Using the UTV, she jogged along to a big mound on the south side. A white stake and seven Dokkens were planted. Then Gigi ran successively longer lines back to the mound pile. After four increasing line distances (with very few whistle, sit handles), Gigi zoom lined the 5th and last line at 267 yards (on the first day). Pounce two years old when first dealt with this point blind and there was more whistle sits and handling. I am still somewhat amazed with Gigi's seemingly effortless, natural abilities. The very first point blind she ran, at the Harrison Road DTA, was equally impressive. After two sessions, the white stake will no longer be in the picture (removed). Gigi has three point blinds setup that can now be revisited and lined from different vantage points. The known destination, allows the focus to be more on terrain and other factors to the points (experience in varying factors ("getting there").       note: Journal entries are usually proof read at least three times.
​

Aug 4,5 two days off.....Since we are not attending any tests this year, the justification for training every day has become difficult. Old habits tend to be pesky.
Aug 6 Thursday - very nice, cool morning.....Gigi and Pounce worked in the yard.  Gigi ran Hillmann's Seven Bumper lining drill (from the left and right heeling sides). Then she rested on a tie-out as Pounce did an extended and very challenging version of Hillmann's Helter Skelter Drill.  Gigi was up again for a second session (working off a placeboard) and practiced four casts with angle back and angle in Dokken retrieves (both sides). After each delivery, Gigi was repeatedly cast back to the placeboard and expected to turn, face, sit and focus waiting for the next cast. These were not easy, brief sessions for either of them.

worked on the seven bumper lining drill. In addition to the casting, there was an effort to seek & maintain eye contact ("look at me"...for the next cast) with Gigi.
Aug 2 Sunday morning - trained in the yard...Pounce again worked on Hillmann's "Helter Skelter" lining drill and the lines were very challenging. Gigi worked on the beginning of graph casting. The target casts were angle back, over and angle in (alternating right and left sides). For a brief change of pace with Gigi (at the midpoint of her session), we practiced the seven bumper lining drill. Then it was back to the graph casting intro to finish the session. Their yard work is actually done in the front yard. (chance of rain this afternoon)

Aug 14 Friday - high in the 80's - trained in the morning doing remote winger walk-ups. Two wingers were setup and Pounce went first. Gigi was next up and then each came back out from their crates in the van for the second round. The launched Dokkens came from behind after a lot of "noise" from the Dogtra electronics and my duck call. "Sit" was signaled via a whistle sit. Precise practice builds solid expectations....in theory. The session went smoothly and both were "amped". We were back in the cool house soon after. 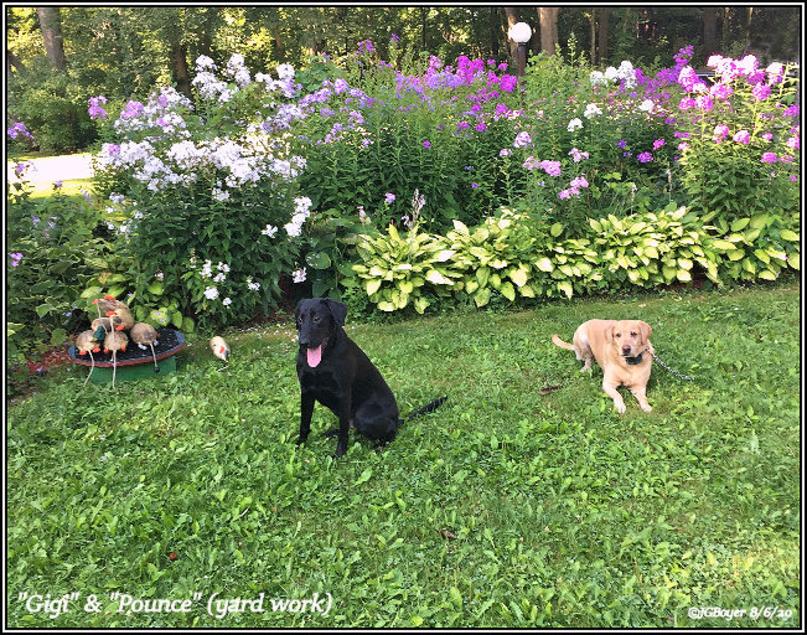