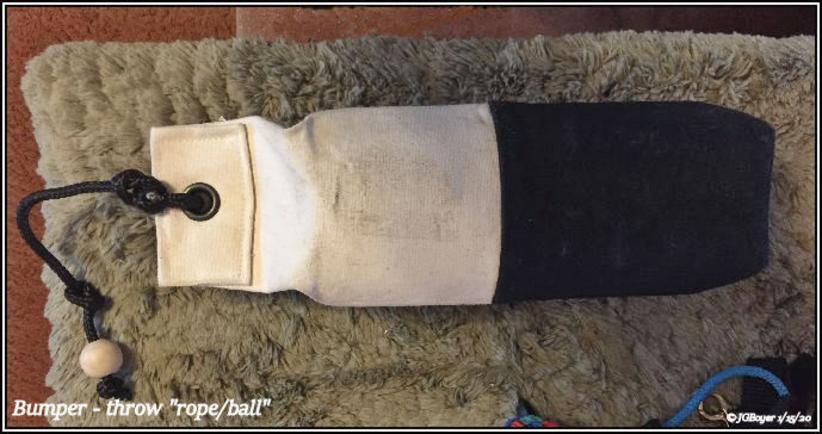 Jan. 2 Saturday - high of 28°F with a crusty, 5 inches of snow.....trained indoors....Gigi and Pounce will practice HRC line "stuff". This will be fun and easy. The difficult training has just begun. My non-verbal, autistic granddaughter is being taught how to be a bird girl. The first lesson was to convince her that tossing a few bumpers, six feet into the corner of the pool deck was fun. No dog was involved and she was not totally convinced of the value of what transpired. That observation reminded me to keep the sessions brief. This is going to be way more difficult than harnessing the instincts of a well bred, driven puppy. Where is the reward? Hopefully, she will find helping a dog have fun will be fun and rewarding for her, too. The most important aspect of this attempt will be applying the KISS method.....Keep It Simple Stupid. Precise repetitions (and not many to start with) will frame each session. Later in the afternoon, dogs were added to the picture. Lylah ignored the practice from yesterday (where she tossed bumpers into the far corner) and decided to throw them toward a dog. Pounce and Gigi had bumpers to retrieve, but Lylah did not see any reason to do what we did yesterday.
Jan. 3 Sunday - The Bears' game is later in the afternoon. Therefore, Pounce and Gigi will do a session of HRC "gun at the line" retrieves with "primer shots"...indoors. The setup is such that one will watch

(and honor) while the other works.
Jan. 4 Monday mid-afternoon - 26°F cloudy & snow cover...Gigi and Pounce worked indoors using a running line, a five bumper pile and a "placeboard" half way around the pool deck - each did ten retrieves with whistle sits, casts, returns to and past a "placeboard" with precise deliveries at the line.
note: I was still light outside when Gigi trained. The sunlight and reflections off the snow

plus many windows in the pool room building make photography impossible. Pounce
trained when it was dark out. When editing her photos, I finally figure out how to manipulate
the perspective editing process which eliminates curved and non-vertical objects.
note: The last photo is a snow covered view of Gigi and Pounce's airing yard. 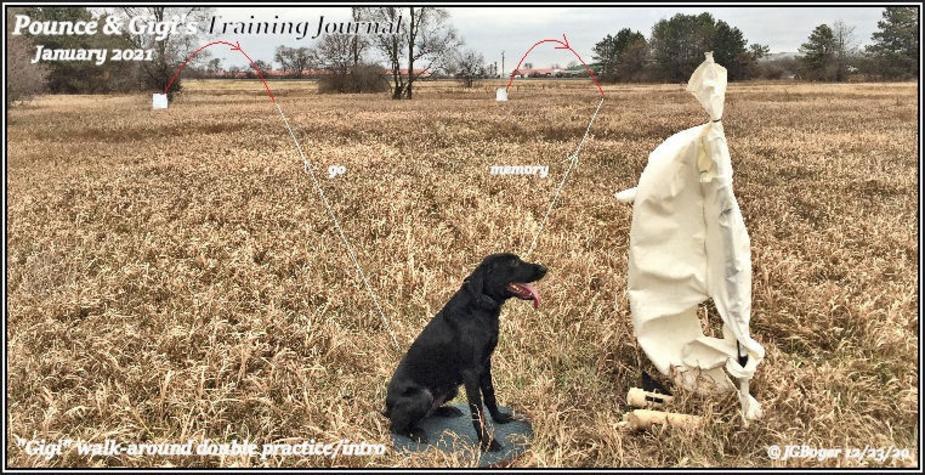 Jan 9, 10 Saturday/Sunday......Gigi and Pounce did ten quick retrieves in the heated pool area on Saturday and Sunday. However, most of Sunday was spent suffering through the Bears playoff game, the Bulls basketball game and finally the Illinois basketball game. It was a long.....long day.
Jan 11 Monday....high of 31°F  with four inches of crusty snow on the ground....12 weeks until the end of
March....snow Thursday and Friday (not much)......Gigi and Pounce worked indoors today. The first session was on  extended heeling (forwards & backwards) with repeated sits practice (OB). Each then did ten retrieves working from a running line and off a remote placeboard. Remote sits and precise hold/deliveries at the line were practiced. It was warm and we liked it.
Jan 12 Tuesday - high 33°F...Gigi did an extended indoor OB session followed by ten retrieves. Pounce was up next for her ten retrieves routine. The total retrieving distances add up to about 600 yards (for each).  They are not at at full speed, but running fast enough to provide a measure of aerobic exercise.
Jan 13 Wednesday - high 36°F and cloudy..The plan was to run a 125 yard pile through a soft, 5 inches of snow at the Riverside Park DTA with each running it four times. The running line had to be moved because the county was dumping truck loads of snow in the wide concrete area just off to the east. There was plenty of room to run in the huge, snow covered area (to the west). Gigi and Pounce had no issues with the line and we were soon finished after a refreshing and vigorous exercise session. The skill set focus was on 1) lining up properly and taking good initial lines, 2) carrying that line with only  a few, prompt whistle sits 3) with handles 4) and lastly 5) precise deliveries. The key to precise practice is responsiveness (working together as a team). The two county snow trucks added a level of distraction proofing that was not planned.  On the way home, we stopped at Farm & Fleet to purchase a 70 pound sleeve of sand for the back of the van (more traction) and 50 pounds of snow melting chemicals for the drive-way. Winter is now well into its regular irritating mode.

Jan 16 Saturday..Gigi's OFA hip report was a GOOD and elbows are normal. Her PENN HIP score is 0.22
(and in a much better end of the range). The next set of testing will be eyes and key genetic tests for Labradors. Gigi and Pounce did a very good, indoor practice session working on their leash OB skill set. The second session was practicing retrieving skills. Five ERGO bumpers were retrieved. They are hard and shaped to enable/encourage holding in the middle, The second set of retrieves was done with five,
four inch foam bumpers. The contrast in the bumpers (hard and "in the middle" focused vs. big, light and soft) makes for handling different objects with the same responses (hold properly and deliver precisely).

Jan 17 Sunday.....Pounce and Gigi repeated yesterday's OB on lead session and the retrieving skills drill.
During the retriever training, Lylah sat near the "placeboard" as a distraction.

canvas bumpers (open wide & hold in the middle). Pounce had the day off. Tomorrow Pounce and Gigi will begin regular practice sessions similar to the HRC line expectations demonstrated in the following YouTube with Pounce.

Jan 18 Monday high of 28°F - four inches of snow plus a hard crust on top equals no training in the snow
note: Gigi and Pounce continue to work on the two skills sets we have recently been practicing.
One of the critical components of balance is responsiveness (teamwork). It begins up close. Jan 19 Tuesday - high 24°F and low 12°F with the same snow conditions = another day of training indoors 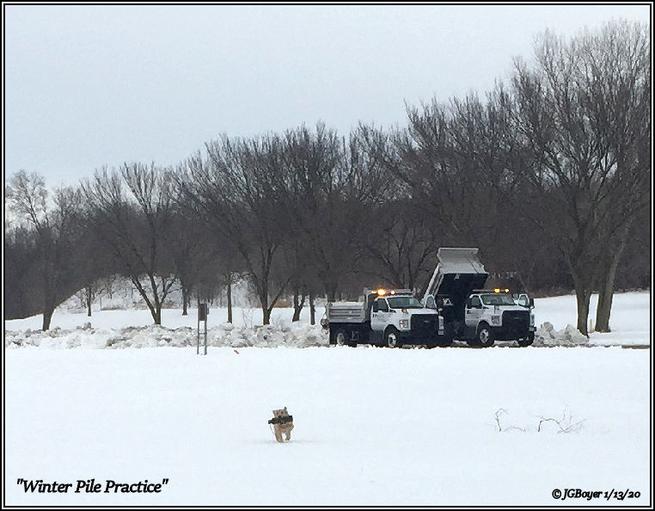 Jan. 5 Tuesday - Gigi is going to have a specialist X-ray & PENN Hip hips - she just turned two.
note: Last night it took over an hour to retrieve the dog van from our driveway. The

solution (besides shoveling) was salt and oil-dry.  Up-hill out is a pain (often).
Jan 6 Wednesday - My VET is a radiology expert and sent me Gigi's PENN HIP report today along
with a congratulations on the .33 PENN HIP score. In addition, there was no radiographic evidence of OA in either hip. In researching her pedigree data base, the first six retrievers in the pedigree include three excellent and three good. Based on the PENN HIP score, Gigi's OFA looks very promising. The first litter out of Gigi's mother (different sire with four tested...so far) include threes excellent and one good. In that litter, there are four that already have HRCH and/or MH titles.
note: The trainer's issues are not nearly as good. The painful, frozen shoulder symptoms with
the right shoulder have been joined by increasing issues in the left. The next year plus
is going to be very be unpleasant.
Jan 7, 8 Thursday/Friday - high of 30°F and the snow is not melting - Hibernation mode is setting in.
When you are older, there are times when recognizing that problem must be continuous. With snow and ice, falling is not fun. When the ice is an issue, a pair of cut-off Muck Boots with YAKTRAXs make

walking easy. They are cut-off because of being worn out (old). These are especially important in the dogs' airing yard (not level). If there is too much snow, then a regular, new pair of Muck Boots come into play. If ice AND snow test the safety, it is simple to transfer the YAKTRAXs to the taller boots.
note: With bad knees and poor flexibility, a portable boot jack is like magic.

Jan 15 - Friday..another winter day...Training indoors was skipped today. The wooden balls project has moved on to finishing off all the Dokkens that do not have balls. That did not sound right after reading it, but then again it is accurate.          A slightly larger hole (than the 3/8's of an inch one that is already there) is drilled half-way through. The end (of the rope) is then pushed through. A small knot is made and then "crushed" back into the hole. These make throwing easier and become very handy when carrying many. 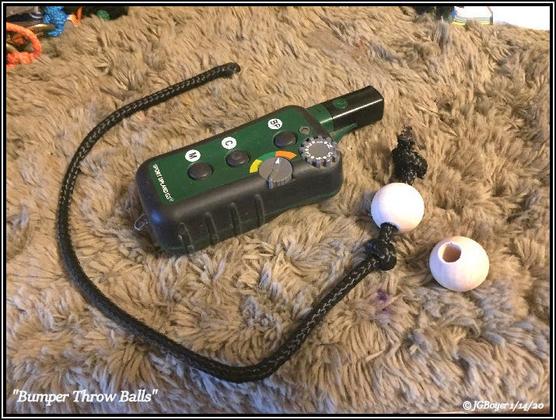 Jan 14 Thursday - cold with rain, sleet and eventually snow...Gigi and Pounce did an extended session of on leash OB using the heated, indoor training area. The large, foam bumpers purchased for winter training in the snow did not have throw ropes. With plenty of long line rope (from diver hunting) and ordering some round, wooden balls  (1" diameter & 3/8" hole), winter is a good time for adding to the equipment. Six were made for starters and I have several Dokken Mallards that need to be "balled".