Sept 1 Sunday - Illinois Early Goose Season - very pleasant weather......Therefore, I decided to not hunt this morning and let the geese develop some sort of pattern.  Once they become comfortable not getting

shot at on Thorson Pond, they will be more predictable. The best situation would be several small groups arriving at different times. This time of the year, they are still flying in family groups. Two or three hunts during this brief time frame of about two weeks would be the most productive.  The plan for each hunt will be in and out quickly.....when the wind direction is best.
note: Today Gigi began phasing in her adult diet dog food - Eagle Pack Lamb & Rice. She is

nine months old.
note: WEB proof reading and corrections is an ongoing process with a lag time of 3-4 days. At
the end of each month, all entries are glanced over one final time (usually).
Sept. 2 beautiful day...geese simply not moving...normally, several small family groups are stretching their range...another day off from training for all three of us......other things to do
Sept 3 brief scouting trip, garage storage alterations, swimming pool issues to be repaired in two weeks

note: Pounce will be going south for training with a pro during February/March in 2020.

Sept 4,5 too many other things to do....Gigi and Pounce had another two days off from training
Sept. 6 This morning KwickLabs shot one hundred rounds at The KAP Gun Indoor range to prepare for tomorrow's range segment of the renewal of my Illinois Conceal Carry permit. This afternoon. Pounce and Gigi each ran two doubles at the Thorson Pond east grassy area. Pounce's were mostly for the exercise. However, Gigi's were for practicing several different skills - heeling, steadiness, marking and retrieving. The key component of this combination was enhancing Gigi's desire to return retrieves to heel. Throwing simple doubles provides the incentive (she gets another retrieve.......quickly). The lush, green grass has not been mowed recently which means the area of the falls are hidden quite well until a dog is right on top of it. The angle between the doubles was wide (about 120 degrees). They were thrown left to right and then right to left. Gigi had no difficult stepping on the memory from a steady line. Pounce is an excellent marker and she pinned both of her exercise doubles. She is five years old and has had quite a bit of practice at marking. Gigi at nine months old was just as fast and accurate (nine months old). The best part of her practice was willingly delivering the retrieves with eye contact responsiveness. The next phase is to move on to wide, slightly longer, remote winger thrown doubles. Also, Gigi will soon begin the process of basic handling and working a pile.
note: It is time to begin working on her sit whistle response when in motion........she is fast!
Sept 7 passed Illinois Conceal Carry renewal test (class and shooting range) good for another five years
Sept 8 Sunday - no training today...did scout the pond for geese  Drove into the Riverside Park DTA and geese are everywhere......along the sand banks of the Rock River and grazing in the lush, green, not mowed grass of the park. It is too pleasant to fly much and with plenty of easy food available they are just not moving.     note: Gigi is now on adult dog food and being fed once a day (the same as Pounce).

Sept 13 more heavy rain early this morning....as I was typing this entry at 12:40 am a thunderstorm  warning was sent to my I-Phone (the weather map is ugly orange and fast moving)....total rainfall for
the last two and a half days has been 3.5 inches.....it will be several days before driving near Thorson Pond will be doable and the Riverside Park DTA will probably be closed again.
Sept 14 Pounce & Gigi did not train today...worked on indoor swimming pool and did another round of garage cleaning......need to make room for the new snow blower (coming soon)
note: My Conceal Carry license renewal is beginning to be a pain in the donkey. The class
was straight forward and I have the certificate . The shear number of renewals has
overloaded the system (too many at one time).
Sept 15 pool was finally ready and Lylah had fun for about an hour
Sept 16 worked on the Conceal Carry license renewal from 8:30 am until 1 pm in the afternoon. It was necessary to be persistent. After talking to the instructor yesterday, there were a few "snags" that required "adjusting". Some of the issues were sequencing steps which is simple to say....not to do.
In the afternoon, the final step to full use of the pool was completed - a new thermal blanket (which saves on the heating costs and greatly reduces evaporation). The overhead Modine heater handles the winter temperatures and humidity is controlled by the use of the thermal cover plus a very large cattle barn dehumidifier.
note: This indoor area provides a warm place to train in the cold winters of northern Illinois.

Sept 10, 11,12 rain plus working on indoor swimming pool - no dog training - two inches of heavy rain
Thursday completely flushed all the duckweed out of Thorson Pond. 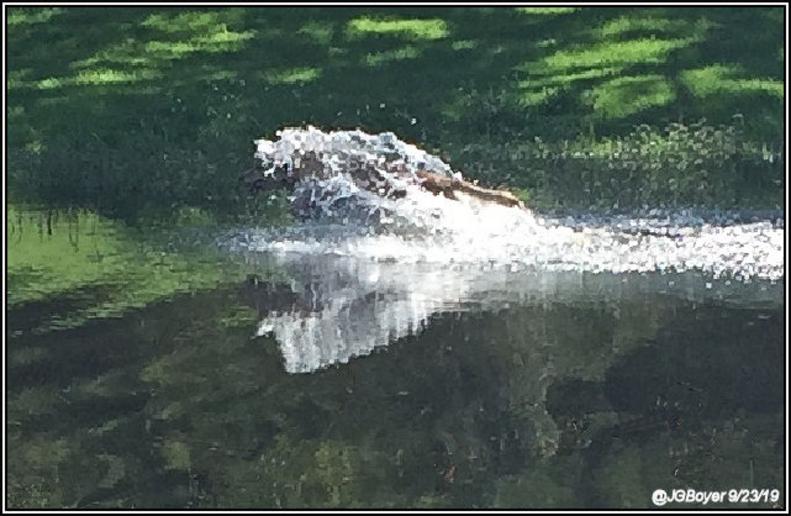 Sept 21 Again at Riverside Park DTA, Pounce ran another point blind (to the north) in the same lunging water. Gigi practiced her up close retrieving skills. We finished just as it began to rain (good timing).

note: The last photo was a surprise when downloaded. Then I remembered Pounce had gagged on something in her throat during one of the retrieves. It was kind of a shock (for a moment).

Sept 24 It is Tuesday. Today Gigi began her first day on the process of handling. She has never been an "OK....what's next puppy."        Therefore, looking at me in this new context was not an obvious skill. Her focus on the bumper off to the right was intense. Her mind was clear. "I know where the bumper is. What do I need you for?" The transition to another layer of context was obviously not in place. The "over" command was premature because our "look" responsive focus was not in place (no pun intended). Therefore, in keeping with Hillmann's philosophy, what must I do differently to cause her to be more responsive (i.e. look at me)? One solution is to remove the bumper and work on eye contact in a simplified format. Looking at me must become fun and rewarding. Now all I must do is to create a situation where that will happen. It is easy to recognize (after the fact), but not so simple in the moment to visualize. Her very high prey drive is not capped very well. This is not be the only time that I will need her to look at me for input. It cannot be ignored or glossed over.

For openers, she is wearing a short rope. We are physically connected. The rope can be manipulated to produce a better mental connection......which is a start. In the past, I have used voice expressions to create focus. A sequence of a soft verbal Hey! plus a slight tug on the lead followed by a verbal "Good!" (for the eye contact) all well timed was enough. This worked before, but with evidently much more responsive pups than Gigi. We will see what transpires. In this moment, Gigi is focused on the end result (HER bumper). She will not be allowed to become self-employed.  This is my first pup that has oozed that trait from day one.
note: My first hunt test dog, HRCH UH MPR Kwick Taffey of JoeMacs MH, made training
seem easy. If Gigi had been my first.....she would have "had me for breakfast."
Sept 25 day off for everyone......too many other things to do
Sept 26 Thursday...The forecast is cool and sunny with a high in the upper 60's. The following link was a source "from the past" directed toward promoting responsiveness. 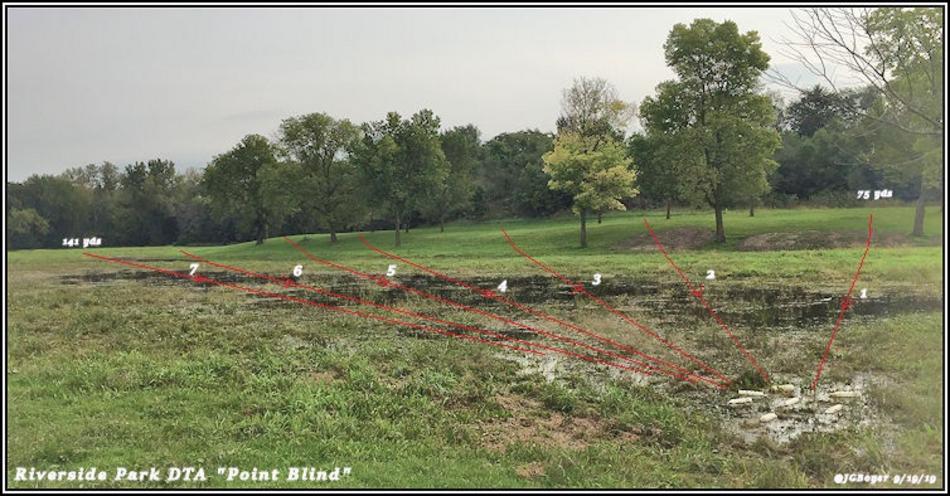 Sept 9 Monday - rain limited training to the Roscoe Riverside Park DTA...Gigi warmed up with a  handling, whistle sit drill (2" bumper). After the prey drive management phase, two remote wingers were setup to run a schooled double. This meant Gigi ran two singles and then two doubles. Pounce did a double in between Gigi's. There are hundreds of geese remaining in the park loafing on the nearby Rock River sand bars. On the way home. Thorson Pond was scouted for geese, but there was just a pair of teal in the pond. This pond is five minutes from the house. Turning into the driveway there was a momentary pause to take a photo of a few of the many turkeys seen every day in this area.

Pounce turned into a Chupacabra.

Sept 17 Pounce and Gigi took turns retrieving singles from the technical pond in the Winnebago County DTA. Pounce then ran several hand thrown singles out into the knee high cover in the upland area. She was literally lining and stepping on each mark.....not easy, large area. Need to step up her

training skills to include walking singles and eventually stand alone/send back singles.
Sept 18 Wednesday...low 70's early, checked the Riverside Park DTA and a section near the main gate was open. The recent flood had more than half the park closed. It was a pleasant surprise to find two low lying areas with lunging water. Gigi warmed up by working on her leash OB and close up fetch, hold heeling skills. An intro to working a very close two bumper pile drill went about as expected. Then she did several hand thrown singles in the two lunging areas.  Pounce was next. The high excitement of lunging water has been an issue for her. This session provided a great deal of additional exposure.

Both will return in the morning. Gigi will do more of the same and Pounce will run a set of cold blinds.

Sept 22 Rain....just what we don't need. However, It was perfect timing for a day off (for all). The park was closed as more flooding was predicted.
Sept 23 We trained again at the Roscoe Riverside Park DTA. The water was up a bit, but the gate was open.
It did not take long to setup a "Stand Alone/Send Back" singles session. Gigi had another very good session of work on her retrieving basics. My youngest daughter was up visiting from New Orleans and
she was along for the view. There was some time today for photo editing. The following had to be first.

Sept 20 trained again at the Riverside Park DTA and Pounce did a set of "Stand Alone/Send Back Singles"
to the north. Gigi continued practicing her up close retrieving skills. Each day is noticeably better and especially with respect to her responsiveness/focus. 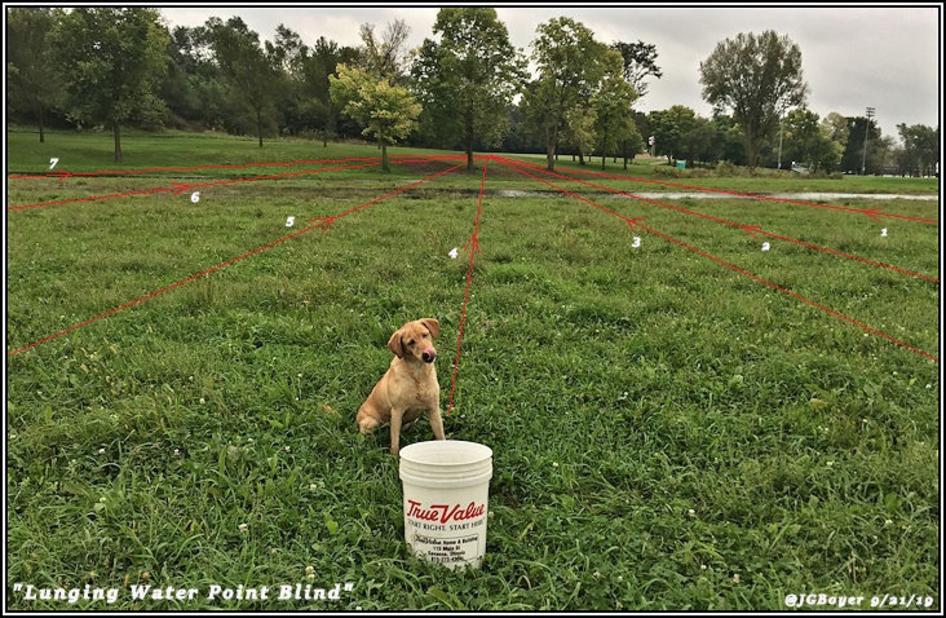 Sept 19 Thursday....trained in the morning back at the Riverside Park DTA - lunging water has been an issue in the past. Therefore, a seven line Point Blind was setup. Pounce ran good, tight lines and was very responsive on the whistle sits (did not need many). Gigi worked up close on her retrieving skills (here, heel, hold, sit and out). Every day there is improvement.    note: more rain in the afternoon.

Sept 27-9 rain, shoulder issues and water chemistry problems with our indoor swimming pool = no training for Pounce and only brief yard work sessions with Gigi
Sept 30 back to a regular schedule of training - tomorrow