Feb 27-28 Sunday/Monday...end of winter (kind of)...will train indoors both days...Vet appointment Friday
Gigi's training focus is primarily on the skill sets required in her upcoming AKC OB class. In order to not

engage the instructor with the concept of using treats,we are practicing with treats. Gigi's has always been somewhat mouthy with bumpers and birds. Therefore, her penchants along those lines needs to be a bit more gently so as to avoid my having bloody fingers. For a few days. it was "nip and tuck" (no pun intended). However, the last two days have shown steady improvement. The skill set is complicated and requires focus.The carry over from performing a rapid sequence of sit, down and stand is shaping up nicely. The results are producing a much more focused, under control and responsive dog. Gigi is motivated to think and react precisely. Making a dog become more responsive requires finesse. This a subtle way to work around the issues of force and corrections.

Feb 1 Tuesday - began planning the turkey blind...The first step was to produce a Google map look at the area and sketch over the photo for turkey approaches and distance. The blind will be in the center of a
360 degree circle with all shooting distances at twenty-one yards or less. (turkey season = end of April)

Feb 2 Wednesday - no snow/several days - Gigi is enrolled in an AKC Intermediate OB class in March.

In the past, all my dogs went through at least one. Since they used treats and I did not, there was always some friction with the instructors. However, this time with Gigi we will "go with the flow". in some ways, recent practice with treats may prove to be a plus. Gigi has always had a snarky mouth.

The fact that we were using Hillmann's training program made her overly aggressive with retrieving. The recent, first few days of treat training her was tricky....not getting nipped was difficult and a bit

unnerving. Slowing things down the second day (more prepared, better anticipation) has cause her to be more careful......which is a good thing. In addition, the aggressiveness has toned down somewhat.  No blood is a sign that I am on the right track. The use of a luring stick was helpful.
Feb 3-4 Thursday, Friday - mild weather for February with no snow...continued indoor training sessions
On Friday Gigi and Pounce did an OB session together. Gigi has done OB only left sided and Pounce was (is) trained two sided. Therefore, it was fairly simple to work both at the same time. This was their very first session and they did well off lead, no collar with several remote sits and downs, side by side at a distance. This new, "now it is my turn", extra distractions OB session went smoothly and was easier than expected. It provided a useful approach to increasing focus, control and responsiveness.
Feb 5 Saturday - The weather forecast reveals no significant snow the rest of February. My two Avian
Turkey Decoys arrived (Jake and Lay Down hen). They look realistic. However, each comes in a box (compressed). After blowing them up, their heads were very distorted (bent side-ways and flat). After a few days of clamping, each looks a bit better. A hot water shower is supposed to make them more flexible. Also, my order of 1000 209 primers arrived. Adding those to the 400 I had will mean remote winger "noise" (gun shots in HRC setups) will be "good to go" (all summer).

note: There is still a "shaping" clamp on the Jake's neck.

Feb 24-25 Thursday/Friday...high of 29°F with the snow not melting. I am glad the airing yard was picked up a few days ago. Gigi's AKC OB class is in about two weeks and we've begun reviewing some of the skills that are not used much in hunt tests. The one we had the most trouble with before was the "stand for examination" skill test. She was almost too "squirrely" then. However, after setting her up for our new evaluation, it seems she has no problem with it now. Day two was like "Wow...no big deal" (with me). The next step will not be as easy. Gigi must allow someone she does not know to do the examination. Feb 26 Saturday...high 32°F & slow warm-up will begin..some snow in early March...day off for Pounce and train Gigi indoors focusing on the "stand for examination" skill set. My Primos Turkey Starter Pak arrived - mouth call, pin box, pot call and striker box call. I played a clarinet, tenor saxophone and oboe in the high school band. These are much easier.

view looking
from  the west
(crop = short
beans not corn) 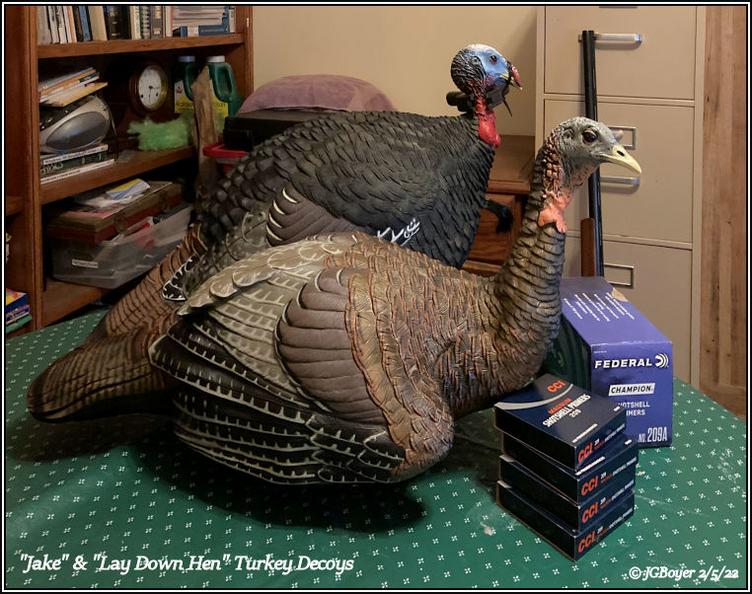 notes: A "placeboard" is part of the daily sessions and Hillmann's
"approach to the line routine" is being practiced.
The home page was edited to condense the monthly journals
with all of the 2021 months "contained" in a specific link.

Feb 18/19 Friday-Saturday - 10°F with 2+ inches" of snow...Pounce and Gigi continue to train indoors. Pounce's sit is quick. Gigi's is becoming quicker with a treat based/luring/reward presentation. The conditioned and fast "want to whistle sit" is much better than the slower "must do whistle sit" response. Presently, the speed of her sit is situational (no pun intended). She was sitting slowly when heeling or being sent on a line to pick up a bumper (slow stop, turn and sit). However, in the present re-conditioning stage, Gigi's sit is very fast and eager. Chaining in the whistle during the luring (instead of the verbal/visual) is the next step. Her two different sit quickness actions are situational (two different conditioned responses). Eliminating the "slow verbal sit" is the goal.
Feb 20 Sunday - much warmer with a high of 52°F 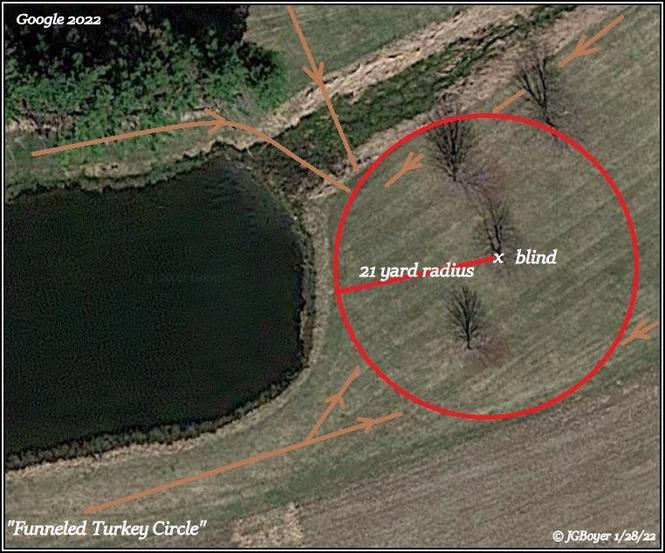 Feb 22 Tuesday..."Two's Day" 2/22/2022.....The next will not be a Tuesday's "Two's" Day because the next  almost "all two's day" is on a Friday....37°F & heavy rainfall (with deep frost not going away anytime soon) will cause some flooding. Trained Gigi and Pounce then did Pounce's nails. The sling method is a winner.
Feb 23 Wednesday...high of 20°F and 2" of snow...Next week the airing yard will be limed and bare patches getting straw. Gigi and Pounce trained indoors. The heated pool deck provides plenty of walking for me. Both dogs are able to run and retrieve. Steady, precise practice is being repeated every day using a wide variety of objects - three canvass bumpers, two fake ducks and a Gunner's Up-Ergo Fetch (recently).

Forward Chaining
Forward chaining involves the dog learning to chain a series of behaviors, usually in an orderly fashion from the first to the last behavior. The behaviors are taught in the order in which they should be performed.

Back Chaining
In back chaining, the order of behaviors is reversed. This means that the last behavior is performed first, with the preceding behavior following. The behaviors are carried out in a backwards fashion. If you are looking to teach a dog to drop a toy in the basket, start out by teaching the dog to drop the toy in the basket. Every time this is done successfully, reward the dog.

Repeat this action several times until it has a strong history of reinforcement. This will cause the dog to perform the behavior reliably. Continue the training by teaching the dog to walk and drop the toy in the basket. After every successful action, reward the dog.

By teaching the chain in sections and starting with the last behavior and making use of the hold and release, all sections of the chain end up being strong and well understood. The reason for this success is because each time the dog engages in the chain, she comes to the end and finishes the chain with something she already knows, something familiar.

Feb 21 Monday 43°F....reminder - Gigi's AKC OB class is Monday March 7th at 7:15 pm...need fecal exam results and vaccination/health records (vet appointment March 4th at 4 pm)...put Gigi in the "sling" and
used Dremel for her nails (much easier 2nd time with less resistance and better results)....Pounce had the day off. Gigi did another extended OB session with a focus on quicker sits plus up close retrieving skills.

Feb 10 Thursday - Gigi and Pounce OB sessions (late afternoon)
note: Forest City Dog Training Club - Beginning Obedience (Beg 2 -  class) March 7th 7:15pm
Gigi (distraction proofing)
Feb 11 Friday - high of 42°F.....a much needed, warm forecast made it ideal for picking up the airing yard
Gigi and Pounce trained in the afternoon - practiced precise repetitions.....off lead with no e-collar
Feb 12 Saturday - much colder...low 20's for a high....Gig's health issues continue to improve with a more relaxed attitude beginning to evolve. Both dogs will train indoors practicing the same skill sets. The concept of manipulating the five factors of a balanced retriever is the emphasis for each session.

note: The five factors are retrieving, "birdiness", focus, control and responsiveness.
note: I spent some time identifying seven weekends (June through September) when Pounce and
Gigi could run HRC hunt tests. Four are close enough to run Saturday and Sunday. I will
probably avoid doing this unless really necessary. Pounce needs three HRC Finished
passes for an HRCH. Therefore, they can be well spaced. Gigi will do HRC starting from
scratch and her progression will be very carefully measured. Entering tests is a hectic
timing issue. HRC Finished entries are often filled within a few minutes. My biggest tests
will be dealing with three issues - 82 years old in August, vision problems (essentially blind
in my right eye) and bicep tendonitis in both arms.
Feb 13-14 Sunday & Monday - Pounce and Gigi continued their indoor training sessions.
Feb 15-17 Tuesday-Thursday..Pounce and Gig trained Tuesday and Thursday...cleaned airing yard (one third of it per day)...This week was focused on getting Gigi's sit to be quicker. As with many skills forcing/making a retriever do something is not as effective as having them want to. Having observed many basic OB classes most all the dog seem to sit quickly......they want to please and this "want" is enhanced by using treats. Many seem to think this approach circumvents the idea that sitting quickly is a must do skill. Sitting quickly to avoid a correction is not nearly effective as doing so because it is rewarding. Producing a quick sit conditioned response with Gigi has been elusive. I have been to many AKC OB classes and most dogs even in the beginning classes sit quickly. They quick to sit because it is rewarding. The reward is an "immediate" event. In retriever training, the rewards can be delayed (which is not a good thing). In the search for a way to induce a "quick sit" or down. I discovered something called a "luring stick" and modified the presentation to induce a quick sit during the motions of a retriever in training (mostly while heeling}. It is fast paced, easy to present and fits perfectly with a retriever working in an up close position (to begin with) and quickly moves on to a dog working freely around the trainer (off lead). The presentation includes well timed immediate, continuous rewards that impact a retriever's responsiveness.
note: off lead with verbal and/or whistle (to sit), luring stick and treats (chain to sit)