Today marked the beginning of a test. It is a singular effort involving limiting Internet dog training forum interactions. There are two excellent forums. The first phase will be a once a week indulgence. The next seven days should be interesting.
November 4-6...Friday-Sunday...some rain Friday and Saturday....three days off from training
November 7...Monday....high of 49°F....Pounce and Gigi ran a 195 yard point blind three times for exercise.
After scouting for any goose activity and consulting previous years goose reports, the decision to put out the "Two Temptations" was due. Last year, it took about three days before any geese dropped in. The weather forecast predicts freezing temperatures in about two or three weeks. Shooting geese will be in a narrow window somewhat like last year...."dang".

Wednesday Nov 16th...high of 37°F with wet snow...not going anywhere. It is time to begin getting the indoor pool ready for winter swimming. Daily work on my knees and shoulders with the Jacuzzi will be wonderful. This pool building addition to our house was a four year effort completed many years ago. 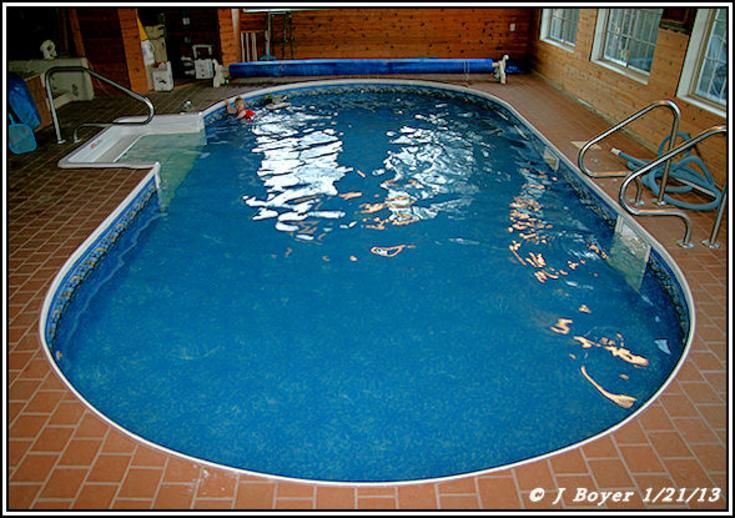 November 1...Tuesday.. high of 68°F...scouting for geese during the present weather trend was again a "wild goose chase"...Pounce and Gigi trained in the yard working on up-close lining and casting skills
November 2...Wednesday..high - 74°F with the next two days about the same...then rain...Pounce and Gigi ran the long point blind (twice) in the Thorson Pond grassy area...exercise & maintenance mode will be the norm for the coming winter months. However, the geese are simply not motivate to move. Meanwhile, the  UTV's oil, gas and battery conditions were prepared for winter and it has been loaded into the trailer. November 3...Thursday..high - 74°F...Pounce and Gigi had the day off. I will work in the yard doing another  second mulching of oak leaves. Today's layer of leaves was thick, fluffy and dry with no grass visible in most areas. There were more than than the last mulching day. With rain for a forecast, the last of the leaves will be down soon. My neighbor to the west had blown his leaves into a pile on half of his front yard (with more to do). Eventually, he will drag them to the back yard (a tarp & several trips). There is another pile in the back yard that already is huge. My leaves are mostly "gone" (fine, mulched lawn food). His will take some time to disappear (move and burn). I am too old to blow leaves into piles, haul tarps full and burn.

Tuesday Nov 15th....Today was the first snowfall which marks the beginning of a long, cold winter of not doing much outside. I did scout the pond today and there were no geese. However, hunting is not that
big of a deal. My primary concern lately has been recent vertigo episodes. I never had any until the fall in the garage when tripping over the boat trailer tongue. A "prompt care" visit revealed no broken bones or a concussion. It took awhile to put things in perspective and dealing with it has not been pleasant. A routine of doing specific exercises three times a day has been effective in modifying the vertigo issue. However, it was not long before I failed to stick to the schedule. This resulted in a quick reminded that my minor vertigo episodes are not going away anytime soon. Winters in northern Illinois are cold and boring. Now I have something else to deal with. Getting old is a "pain in the donkey".

There is no ice on Thorson Pond. The next four days will be in the 20's followed by nine straight days with highs in the 40's. There is a chance for another goose hunt (or two). Scout for geese every day.
November 17 - Thursday...high of 31°F...a large number of geese were in Thorson Pond around 10:30 am and gone in the early afternoon. In four days, much warmer weather may provide some more geese. I may need to purchase a few extra bottles of propane.
November 18 - Friday....high of 23°F...scouted Thorson Pond (no ice & no geese)...Legend Lake was "wall to wall" with geese and has about a thousand geese loafing there this early winter.

The warm, indoor swimming pool deck provides a clear path to work comfortably all winter long. Pounce and Gigi will be practicing OB (on and off lead, indoors all winter long).

November 8 Tuesday...day off for everyone....went to Dr. with neck infection issue...antibiotics plus still dealing with vertigo (two separate issues)...getting old is normal???
November 9 Wednesday...cool and sunny, around 60°F...neck infection seems to be better. I moved the two goose decoys to provide a better view (if anything checks the pond)..tomorrow afternoon decoys on land.
Pounce and Gigi exercised by running the 195 yard Thorson Pond (shoreline) point blind (3x)...They like it!

Sunday/Monday Nov 13&14th in the 20’s…ice & freeze-up soon...No hunting on Sunday....It may be over
soon. On Monday. the previous day's scouting trip indicated one small group will be back. The weather forecast was for temperatures in the teens with no wind. The no wind factor was a good thing...so Pounce and I went to see if they showed up. At about 9:30 a small group came in quietly and buzzed right over my blind before there was any chance to react. I stood up in the blind and managed to wing one as they headed south. A second shot (swat) ended up with Pounce making a retrieve. With the
ice forming on the shoreline, snow in the forecast and lower temperatures, I decided to pull everything
and cover the blind so that no snow will get inside. Meanwhile, I began to notice my vertigo sensations were returning. The process seems to keep things on an even keel, but I had been slacking on the therapy. Once home, the self-initiated process was completed and things were immediately remediated. On a side note, after Pounce retrieved the three geese yesterday, she demonstrated a limp tail. It was not severe, but she was uncomfortable. At first, I was thinking about taking Gigi, but Pounce seemed much better and I did not expect to have three more to retrieve. As luck would have it, the only goose shot was flying over the blind and landed out in the bean field.....not water. I was cold and fairly certain no more would show. Therefore, I closed the blind up (snow inside would not be good) and a small tarp covered the shooting widow. Ice was forming on the shoreline and the pond is shallow...."ice out" is tomorrow.

Nov 12 Saturday – I unloaded "stuff" at the blind (in the dark) and parked my van behind some shrubs about 100 yards away. We (Pounce and I) walked back to the blind. This time of the year mallards or teal might arrive before sunrise (wishful thinking). It was 31°F.  I thought I was dressed warm. Luckily, my Mr. Buddy Heater made a huge difference. We would have been miserably cold without it.  After a couple of hours of waiting (no early ducks), two small flocks of geese dropped in without making any noise and well spaced. The first group left quickly after I dropped two. Pounce was soon busy doing her retrieving on two geese and they were not coming  back without a fight. Twenty minutes later another small flock came right in without any hesitation (no noise again). It was good to bag that third goose (for an Illinois limit) because I was cold and tired. After a long break back home, I somehow found the energy to clean the three geese. The pond was scouted again late Saturday. It is getting colder every day and ice out is going to be soon.

Nov 10 Thursday…last warm day…upper 70’s…worked on front lawn “whacking” flower beds. The two goose decoys placed in front of the blind had visitors this morning – the count was fifty-two. In the afternoon, they split up and several were right in front of my blind. The plan is to check again near dusk and make sure they did not staying overnight. They did not and decoys were placed near the blind with the plan to be back way before sunrise (decided not to later).  photos of about 50 geese on the pond

November 27...Sunday...high in the 30's...There is ice on Thorson Pond and goose hunting season is over. This marks the beginning of cold winds with snow and ice. Fortunately, the indoor swimming pool is magically warm.
November 28, 29, 30...Monday-Wednesday...highs in the 40's delaying the inevitable......winter.

November 19, 20...Saturday-Sunday...in the 20's...no training...we (not the dogs) will be swimming indoors
November 21-30...day temperatures in the 40-50's...rain, winter thaw, geese???....could prove interesting
November 24...Thursday...Thanksgiving...high of 54°F and sunny...Gigi and Pounce ran about 400 yards in the Thorson Pond grassy DTA (exercise)....some slight thaw around the edges  of the pond
November 25....high of 50°F and sunny....scouted Thorson Pond for ice conditions and it has become very obvious the hours above freezing are loosing to the below freezing temperatures. In the next couple of days, the blind will have a tarp cover which will protect it over the winter (in theory). Legend Lake is freezing over except where the aerators are working. A much smaller number of geese will remain there for the winter.
November 26...high of 55°F...the plan for this winter is to train Gigi and Pounce indoors and outside when the snow is not deep and temperatures are tolerable.

note: I bought a CrockPot Slow Cooker to experiment with cooking geese "bagged" this season. The
first phase (experiment) was to make thin vertical slices of a breast and treat those slices with
Kosher Salt. After coating and waiting one day, the treated slices were rinsed, fried (browned a
bit) and placed in the bottom of the cooker. A couple of small potatoes were sliced and added.
About two cups of chicken broth were poured in plus a good slug of Worcestershire sauce.
Additional ingredients included one roughly chunked onion and separated pieces of one garlic
clove. The "small" cooker was on high for about six hours. The pieces of cooked goose meat are
then shredded and placed on crackers with a small amount of barbecue sauce.  I may need to
buy a larger slow cooker and shoot more geese.

Nov 11 Friday…cool with rain until almost sunrise...Decided  scout in the morning. Decided to wait on hunting until Saturday. Then Sunday will be off (maybe) with Monday for a hunt. Getting cold and freeze-up will be soon. Ice will bring a short season just like last year. Geese were back (not quite as many). Check at dusk to see if they left…more photos 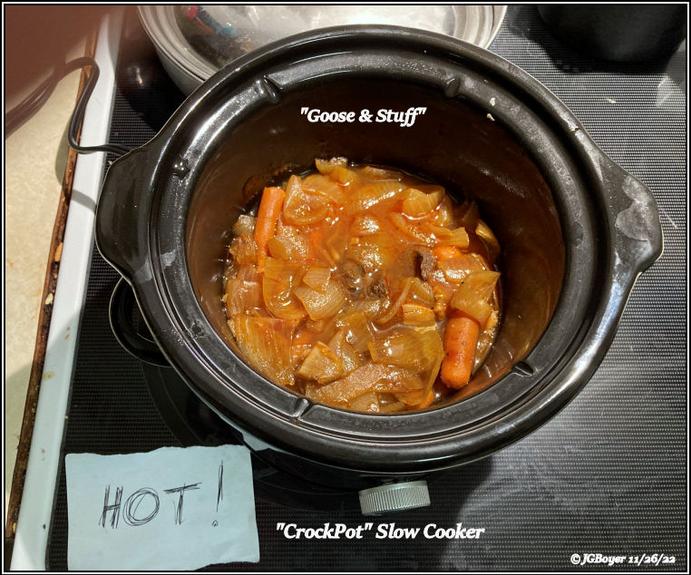 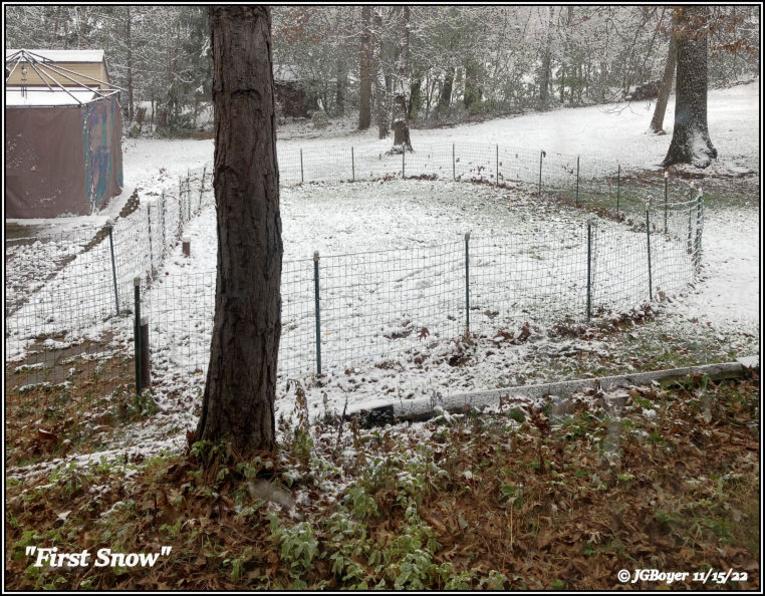 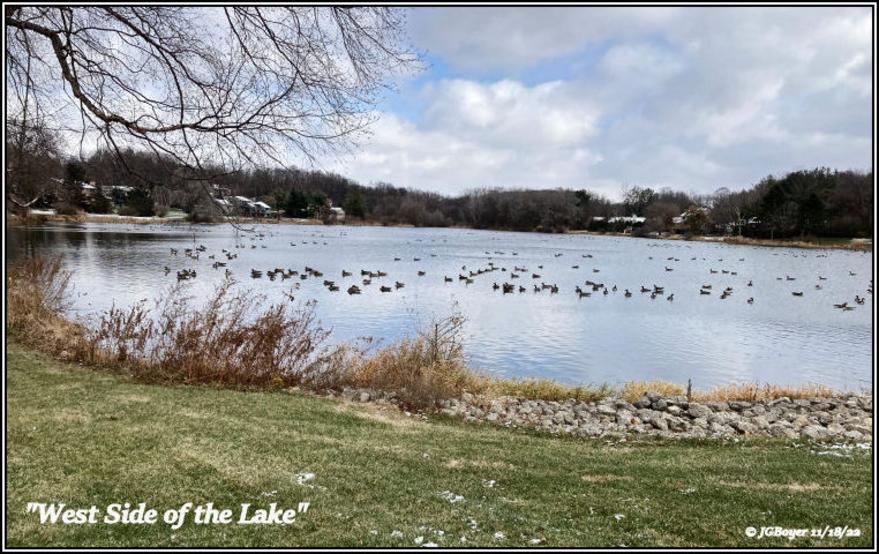