One of the definitions of “engagement” is fully occupied or having your total attention. As this relates to retriever training, the synonym is responsiveness. Therefore, it is significant to identify situations which have a direct impact on promoting and maintaining responsiveness.

If one were to judge retriever training skills as a measure of much of the above, it would (should) be fairly obvious that simply fallowing a plan (or program) will not work unless the trainer and his dog are fully engaged. Responsiveness is a “Two Way Street”.

The critical component of this entire “picture” is that the trainer is responsible for developing engagement……not the dog. The old expression “You can’t push on a rope (to make it work).” comes to mind.

The motivation of this “study” was created by several observations of actions and reactions with my eight week old pup. Focusing on just three, the following proved most interesting. The first was the difference in behavior of my pup the first few indoor “walks” around the pool deck. Initially, she was cautious and stayed with me…..never venturing farther than a yard or two. My first reaction was “Geez, she is very responsive and likes being with me”. She aggressively beat up a motion goose decoy three times her size, cautiously went into the dog hide and showed a lack of desire going up and down the stairs…..pretty normal “stuff”.

Two days later, she does not wait for me and bolts half-way around the deck and plows right into the dog hide. There is little inclination that walking with me is necessary…….until she becomes bored “with the moment”. At times she walks with me, but mostly not. She has the “lay of the land” figured out. She does not need me and running toward, in and out of the dog hide often is a “big deal” for her. Evidently, the straps inside are fun to tug on and bite.

Looking back to the beginning of this session (before we went down the stairs onto the deck), she was given a drink of water (up by the puppy pen). Toward the end of the session, when we were at the farthest point of “the walk”, she suddenly bolted around the deck, jumped over the two little hurdles and literally flew up the five steps. I soon heard a puppy lapping up water.

Engagement begins on day one. Be aware (pay attention) and plan ahead.

Recent update (brief interpretation) which altered today's session: Until a very young puppy is thoroughly engaged within arms length of the trainer......more distance is contrary to the Hillmann philosophy. A pup should be conditioned to (understand and seek) the excitement, fun and reward of interacting intimately and "up close" with the trainer.

The "issue" of distance with a young retriever often times comes across as ambiguous. The concept of short throws in the hallway has not been noted much lately. And of course the issue that my pup will not return with the bumper is relatively "normal". Why is that?

For years, the expression "distance erodes control" was something I could "parrot". However, the significance of that never really sunk in until recently. The sequence went something like this. I posted a video of my eight week old pup a few days ago working on a Hillmann intro. Then
fortunately, my long time mentor (and friend) watched it and offered some advice. Three and four yards tosses were too far. We were not really engaged. Now it may have appeared that way because the tosses were "short". However, short is actually a rather vague description.. They must be no longer that an arms length if you are truly "Doing early Hillmann". 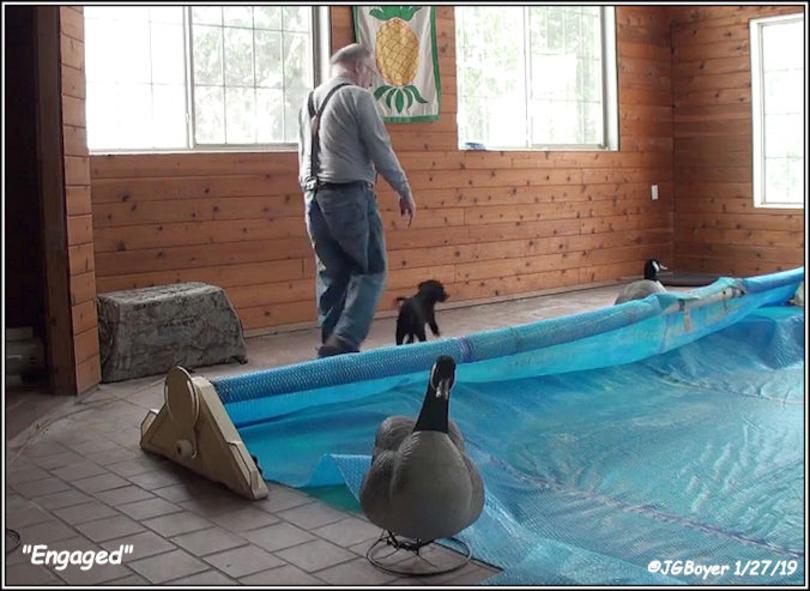