Oct 31, 1915 "permission granted" (from wife) to hunt Saturday morning...however, a cold rain was forecast and hunting in the rain is not one of my favorites.....changed mind several times, but the scouting report was difficult to ignore....five minutes from the house was the deciding factor. Setup 10 minutes after shooting time, loaded gun and almost immediately a widely spread bunch of mallards just blasted in from the west. Right away Pounce had a drake and hen to retrieve....her first wild ducks.

Then.....nothing but the wind, rain and cold began to remind me of how I hate hunting in this "stuff". However, the two mallards kept quacking, "quit your complaining". About one miserable hour went by when the geese started moving. However, in this weather they were more interested in finding corn than loafing in the pond. Time continued to plod along as the rain relentlessly kept pecking away at my morale.....Finally, a small family of geese semi-committed to the pond low enough for me to "kind of drop" Pounce's first goose.  It sailed a couple of hundred yards up into the corn......she got it.  The rain forced me to keep the camera in its Pelican case.

Of course this turn in good fortune served only to pressure the idea of "sticking it out a bit longer". So Pounce and I sat shivering in the cold, steady, wind driven drizzle for another hour. Geez! I hate to hunt in the rain. Never seem to learn.......but a hot shower after a cold hunt is cool.
note: Pounce was now officially "semi-goosed". 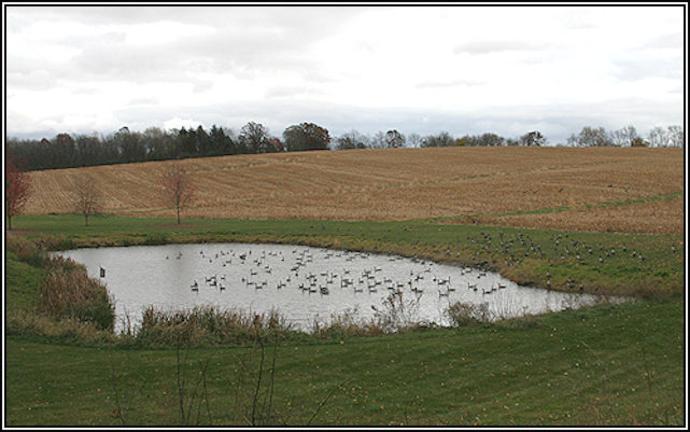 Aug 22 Pounce "pranced" with me to an "old" walkout blind (had to keep the big Dokken Goose up
on my shoulder) and finally "chucked" it into the weeds near the base of an old elm tree. Returning to the line (and finally settling into the steady routine), grass flew on the "Back!" command, Pounce
"hammered" the 100 yard Dokken Goose. She swooped out, snatched it up, carried it back high (in the middle) and literally flew to deliver. Exciting stuff!

next up: Thaw out the nine year old, "veteran" frozen goose for one last "go around" with a pup.

Sept 24 morning......after the brief marking drill, Pounce was taken to Thorson Pond for her first retrieve of a full sized goose......the bird freezer had a nine pound goose from years ago when Daisy "DID" her intro to goose retrieving. This goose was dropped at the end of the "old" 100 yard pattern blind (which she had not run for quite some time)........surprise! after bringing it back...she was sent
to retrieve it from across the pond.......getting into and out of the water was "interesting" and
she found out moving it in the water was "simpler", another five pounds of muscle (when she matures) plus a bit more experience will make retrieving big geese much easier
note: she wanted more

In August, the rest of the Pounce's goose "conditioning" will be completed and she will be ready.

July 28th (see journal), Pounce  was doing a variation of Carol Cassidy's Renagade Drill (angle backs)
with goose sleeper decoys (more conditioning). Pounce was not in the least bit distracted by them.

This spring, on one of the trips to Fish/Duck camp, Pounce began to "work at" retrieving a large and not very flexible Dokken goose dead fowl dummy. She pushed and pursued for quite awhile before finally figuring out that "opening wide" was required.

During the very cold months of winter in northern Illinois, Pounce trained often inside a large, heated indoor swimming pool building. The surrounding deck was perfect for the exciting, moving OB work and "other" fun which went on as we worked through the early phases of Bill Hillmann's program. There were plenty of visible goose decoys "in the mix".

My first trip to North Dakota in 2005 was challenged with the fact that 1) I’d never hunted or shot a goose in over 40 years and 2) my experienced hunting and test hardened dogs had never picked up a goose. The
plan was to make sure they could….......before they had to.  They were ready, but I was totally unaware of the impact of that first flock of geese and immediately became transformed to embrace the thrill as often as possible. After returning to Illinois, permission was sought to "shoot a few geese" on a nearby property where I had been training. I was "hooked" and soon had two bands from Ontario. We were on the X often and went rather overboard on gear - goose trailer, ATV and decoys ("lotsa" decoys), but most all the sound of an incoming flock of geese off in the distance became "my drug of choice".

Taffey, Daisy, Kooly and Daisy spent many years retr​ieving geese. Most were carefully spaced visits to "the magic place" and by doing this only a couple times a week, the geese were never "burned out". Taffey, Gunny and Kooly "left" after many years of fun. Daisy (12 years old) is (update Jan 1st, 2017) not able to share in any hunting with Pounce. "The Beginning" for Pounce's seamless training for goose retrieving was underway.

In  November '14, when Pounce was five months old, she stayed in the van stashed out of site under the tall
pine trees off a ways from Thorson Pond. Daisy and I hid in a small blind close to the water and a few Dakota goose floaters. It wasn't long before "magic" sounds off to the east announced their arrival. One did not leave. After Daisy's retrieve, Pounce was brought from the van to "investigate" and a camera was ready. I was positive she would be another "goose loving" KwickLab.