Steady
Class Is In Session at Your Side

Dec 2 Thursday - scouted pond for any goose activity (two times with nothing). In addition, all the ice has melted.....trained Pounce and Gigi. The focus for both will be based on a Goodwin quote, "Ultimately you "win or lose" within an arms reach.  This is why it is important to understand why "ALL future training develops from and depends upon the training that you initially did with the dog at your side." That is why sequentially developed conditioned responses are necessary. Gigi and Pounce need a new set of conditioned responses. Gigi's issue about having her nails trimmed was "cured" today. The sling works.
Dec 3,4 Friday/Saturday - The drought impacted goose season and created a huge change in patterns. It remained warm and dry with grass becoming normal fare. Thorson Pond had no ice or geese today, so my granddaughter helped remove the goose blind's fast grass covering. She was a very good gopher. The clamped on mats came off a lot faster than putting them on. The remaining waterproof fabric will be removed before snow becomes an issue. However, I want to see (when it freezes farther north) if any  Wisconsin geese drop in and their reactions to just the dark yellow/olive fabric.

The change of pace in training sessions with Pounce and Gigi was not subtle. With Pounce the e-collar is effective when she is wearing it. When she is not....her behavior is way too casual. With Gigi wearing an e-collar it's mostly "is that all you got" vs. "I am free and not attentive...often". Again this is all in "the up close" sessions. Therefore, the heeling stick has entered the picture and in every situation when they are not in their crate. Basically, we are now in the stage of demanding correct repetitions with many weeks of reps aiming for well conditioned responses by the end of April (five months). After about a week, the differences are 1) much improved eye contact, 2) quickly reducing repeated commands, 3) a willingness to wait (to see what is expected next) and 4) not very many reminder/corrections. Two "OK! What's next?" eye contact, responsive retrievers is the  target.
Dec 5 - Sunday.....high of 32°F, windy with a cold steady rain....nasty. Removing the "fast grass" from my goose blind yesterday was good timing. The heated, indoor pool room deck is perfect for working on Gigi and Pounce at an arm's length (responsive OB).
note: Our old furnace needed some PVC repairs dealing with a moisture venting issue.

Fortunately, my son was able to repair the cracked PVC pipe area.
Dec 6 - Monday wind chill at noon....15°F.....lawn mower to the shed and snow blower to the garage.....but there is no snow in the forecast for at least a week.
Dec 7 - Tuesday...so much for the forecast....some snow, windy and cold. Trimming Gig's nails has always been a struggle. So a sling was ordered. Something to hang it from required a few trials. One issue was to not have it take up much space. The first idea looked good, but it proved to be cumbersome. The second trial works well. It is a somewhat larger than normal sawhorse. Gigi pretty much resigned to just hanging out right from the beginning....what a difference. Pounce was fine with it, until I cut one nail too short. The physical part of doing dog nails had become somewhat more than a simple task. Being 81 years old with bad shoulders and painful knees required the sling equalizer.....and I will be going back to using my Dremel. 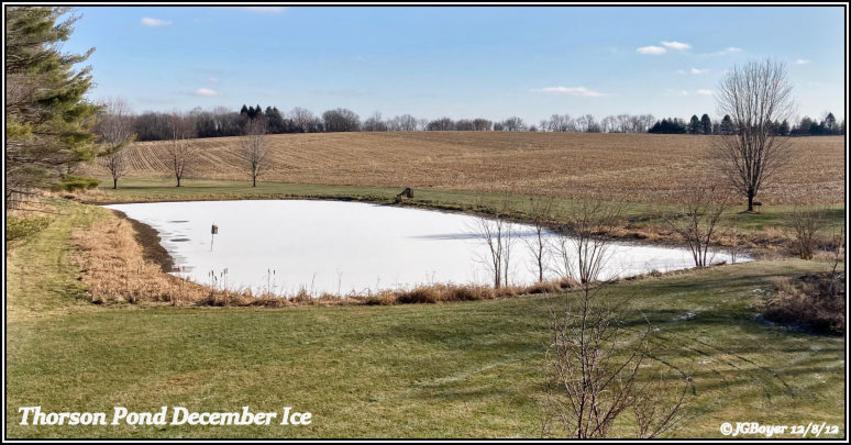 Dec 18 Saturday - cold & windy....spent some time storing blind materials and decoys
Dec 19 Sunday - cold and windy again...I had to run a few errands and decided to take another look at Thorson Pond to see how much ice had formed. It appears "they" were simply waiting until i gave up. They had quickly decided (since the blind was gone) that Thorson Pond would make a perfect roost.

Dec. 29-31 Wednesday-Friday - at 3:30 PM (Wednesday) it 33 F° with a steady fall of light snow. Thursday, Gigi finished the three day treatment of Panacur (fenbendazole). Thursday/Friday will end what has been an interesting year. The plan for the next three months is to train often. Pounce will train to complete her HRC Finished title and Gigi will be working on becoming a more pleasant retriever (now that her physical issues seem to be rectified). My plan is to make it through 2022. 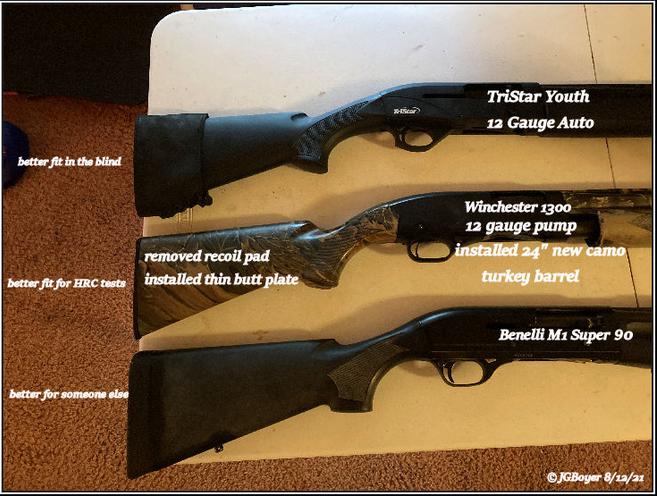 Dec 20-1 Monday/Tuesday - cold but still warmer than normal for late December. There is no snow on the ground. In addition, there are two, small streams north of Thorson Pond that for the last many years have had a steady flow of water (sometimes out of their banks). This winter both streams are nothing but dry channels. The geese in the above photo have not returned and Thorson Pond is iced over again with colder weather in the forecasts. However, we will probably NOT have a white Christmas. Late Tuesday

afternoon, the living room curtains (to the north) just happened to be left open. Geese in small groups of three and four continued to fly over up above the tall, leafless oaks in the back yard.

Gigi was spayed on Monday and that went smoothly. She was a bit tentative moving around the first 24 hours and was careful when let out to air. For a few days, she will be taking Carprofen for any pain. She seems relaxed and OK with the way things are progressing.....me, too.
Dec 22 Wednesday...30F° for the high....With no snow, keeping the airing yard cleaner is much easier. The
primary focus of Pounce and Gigi's winter training will be "getting to the line" under control and precise sits at the line. Hillmann has two YouTubes that focus on these desirable skill sets. 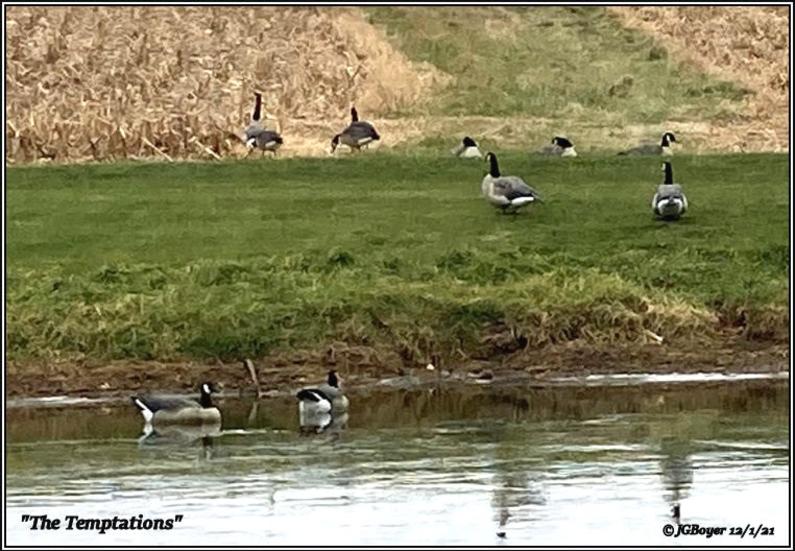 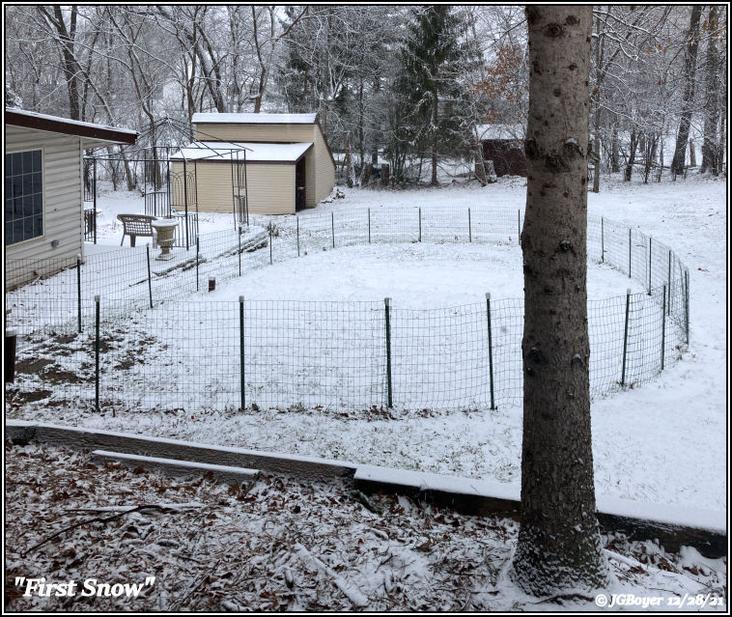 Dec 23 Thursday....42F° quite a bit warmer than yesterday...Gigi was more animated/playful today and has recovered from her spay surgery quickly. In January, Pounce and Gigi will begin a winter training schedule.
Dec. 24-27 Friday-Monday...still mild weather for late December. Saturday, the leaves in the airing yard were raked into several piles. Sunday the goose blind frame was removed from Thorson Pond. Later in the day, the raked piles of leaves were transferred to a large tarp to haul into the woods. My shoulders did not fare well and the "hauling" will be delayed until Monday. Pain is nature's way of saying "You are doing something wrong." However, getting old is difficult to avoid. On Monday, Gigi's vet called to relay the information about Gigi's spay surgery. The uterus and ovaries looked normal. However, samples from the intestines revealed some minor infections indicative of a possible worm issue. She will be treated with Panacur...again.
Dec. 28 Tuesday...It finally looks like winter is trying to take hold.

Dec 11-12 Saturday/Sunday - snow on Saturday...gone on Sunday 55 mph winds did no damage. There was time spent storing decoys and wrapping up the goose blind, Fast Grass panels for storage. This was
a hunting season to forget. Fortunately, journals make it possible to go back in time to visit better days.
I have a permit for the 1st Turkey season in the spring. Today, I entered an application for the drawing for another turkey in the second season. It is possible to enter the third drawing (one down two to go). Turkey

tastes better than a goose. 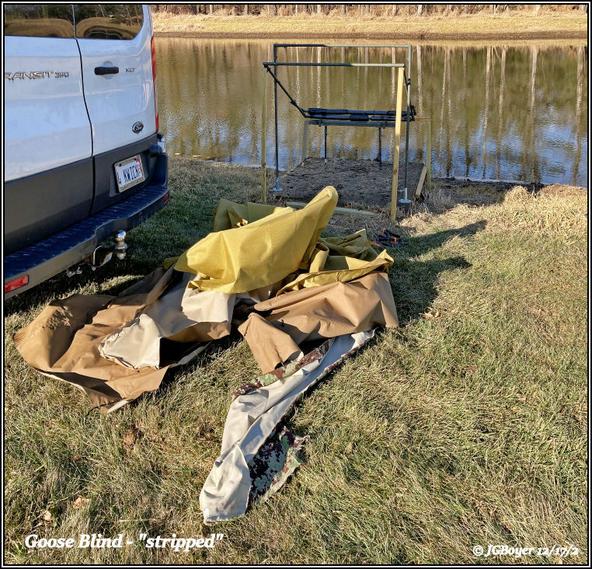 Training in December for Gigi and Pounce will continue working with the information discussed in three OB articles written by Butch Goodwin from Northern Flight Retrievers.

Dec 17 Friday - sunny, stiff breeze in the middle 30's..decided to remove the fabric from the goose blind.
The original plan was to make this easy. It took only about 30 minutes. Parts were labeled and will be fairly simple to put back up next season. The tall, old, dead pines on the north side of the pond make it very

difficult to justify placing the blind back there again. Geese simple changed their feeding tendencies this year and have not used the surrounding grain fields.

note: Several days ago I took a hiatus from posting on the two dog training forums. It's not like I need to do this. It is more like does it make any difference? I got a bit soft in my determination and soon realized the idea of not posting is not that radical. However, habits require a bit of motivation to eradicate. Maybe it is because I am getting old....or simply wiser. This reminds me of a moment back in high school. The Vice-Principal was in charge of discipline and was slowly becoming unglued. One morning, she decided that being late for class was her next big issue to correct. The late bell had just rung and EVERYONE was still dawdling along in the halls. Then the intercom came on and her high screeching voice bellowed "Everyone must be somewhere!!!" For a moment everyone stopped and looked around as if to say "OK, I am doing just that." and then casually continued on their way.

The rationale to avoid posting on dog training forums was reinstated because of a simple thread on RTF. A relatively new member stated that 1) he was using Hillmann, 2) was somewhat through single-T and 3) having trouble with the back command. Almost immediately someone suggest that he use another (very different) program and/or do "walking baseball". I have no idea why this made back off on the forum posting habit. Now if someone could just make me not watch the Bear's game tonight, my day would be complete.
Dec 13-16 Monday/Thursday....extremely mild weather for December and the high winds very recently made leaf raking a simple issue. The large number of oak trees make late fall busy. However, the wind blew all the leaves into the airing yard fence and the rest into a wooded area on the back of the lot.

Dec 1 Wednesday - afternoon high of 52°F and cloudy with a slight breeze out of the south. Thorson Pond had thawed out some overnight and a few decoys were set out to see if any geese could be attracted. With no snow for the next ten days and some above freezing conditions.....it might happen. 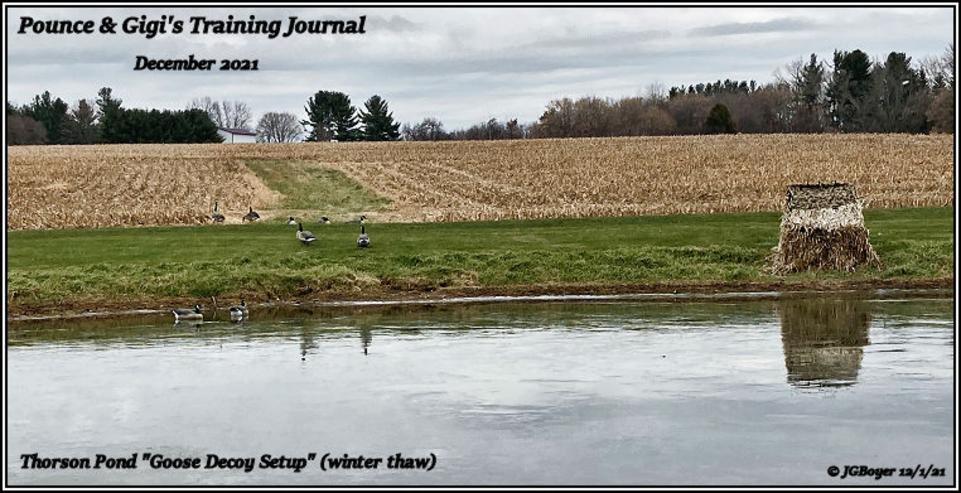 Dec 8 - Wednesday - another cold, windy day......stayed inside and warm
Dec 9 - Thursday - high of 43°F....today was the first time I saw any geese feeding in a corn field. Up until now, they have been content with lush grass. Ice is now an issue with Thorson Pond and a larger lake nearby which often holds hundreds of geese is beginning to freeze.  (rough estimate 4-500) 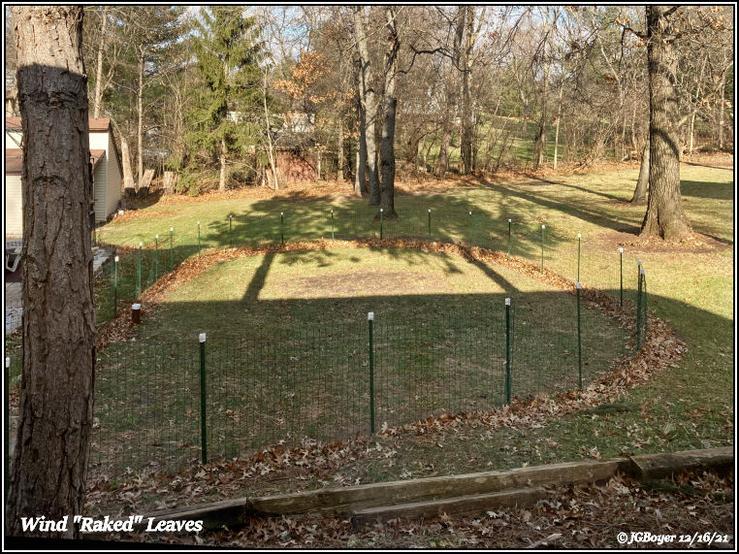 Dec 10 Friday - high of 48°F with rain, wind..20-30 mph with gusts 50 mph...(last year December 11th - rain)
Today I received a notification that my lottery application for an Illinois turkey permit for next spring was drawn. Thorson Pond came up empty for geese this season and this has been the first time over the last several years. However, all is not lost. There is a large population of turkeys that "flirt" around the pond every spring. This past summer I bought a "camo-turkey barrel" for my Winchester pump.