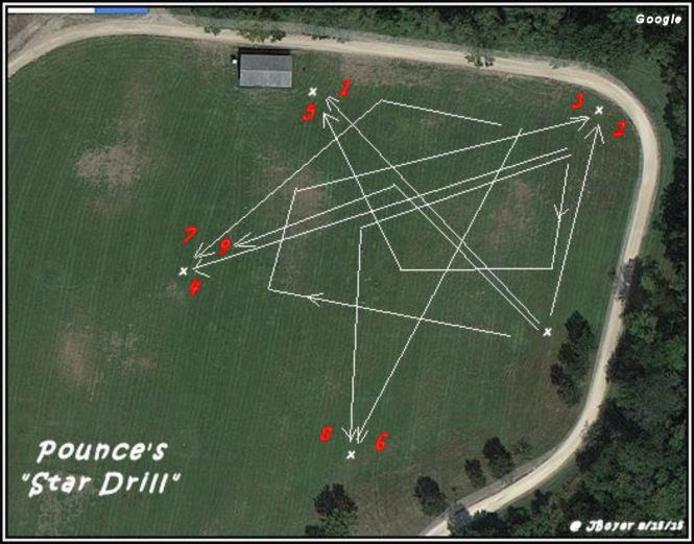 note" It should be mentioned that I had just recently had left shoulder rotator cuff surgery making mounting and shucking the gun difficult (painful). (It was a complete cuff tear after falling down a flight of stairs).

Update:
Dec 14, 2017 It  is cold and goose hunting is over ("ice"). However. training is never finished. Next summer will be testing and Pounce is preparing for AKC tests. Much of what a retriever does is determined by precise, regular practice. Achieving and maintaining high standards is accomplished by doing correct repetitions. The setup for today was a modification of the "Star Drill". The purpose was to practice lining and handling in addition to maintaining physical conditioning. Keeping in step with Hillmann's philosophy, "work" must be fun. Therefore, "The Game" is always part of the action. An excited retriever is easier to train and with a Hillmann dog, every phase of training is exciting.

note: After running the setup, picking up the stakes afterwards provided an
opportunity for Pounce to practice an upbeat, exciting session of
heeling "ala" Hillmann's approach (program). 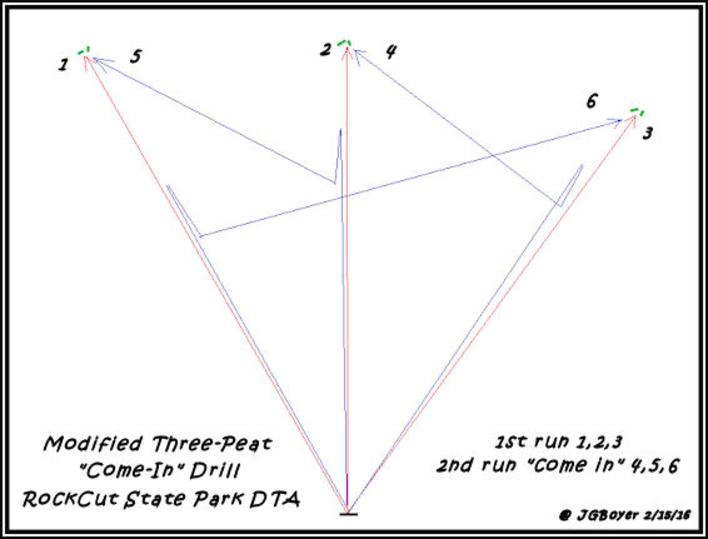 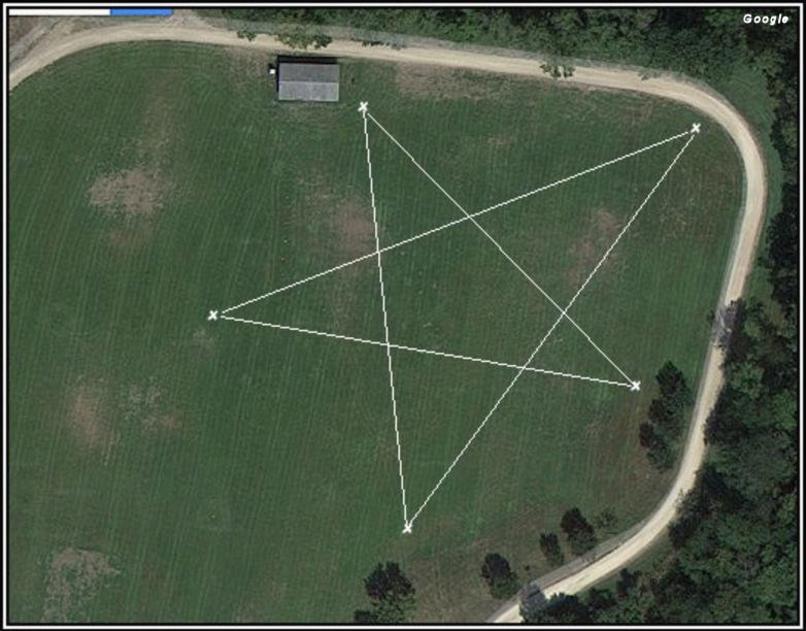 The following training photos/diagrams are of the same theme - exciting, precise practice. Practice is the key to developing reliable conditioned responses.
Sept. 2018 UpDate 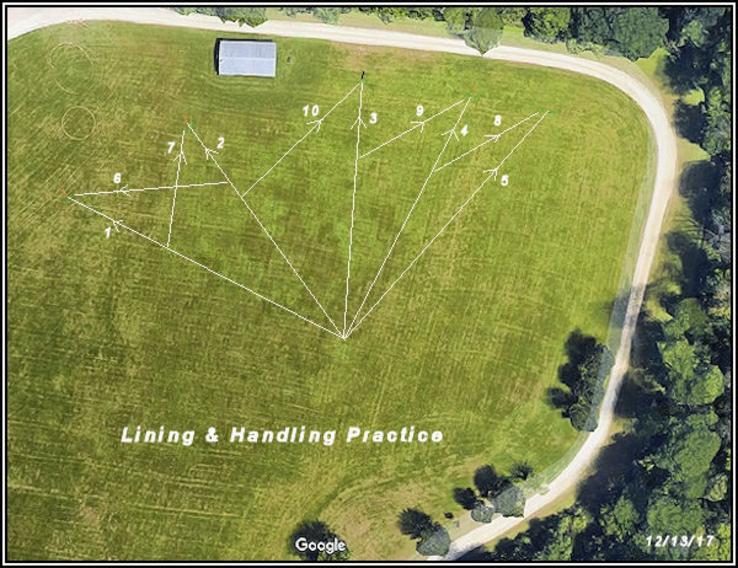 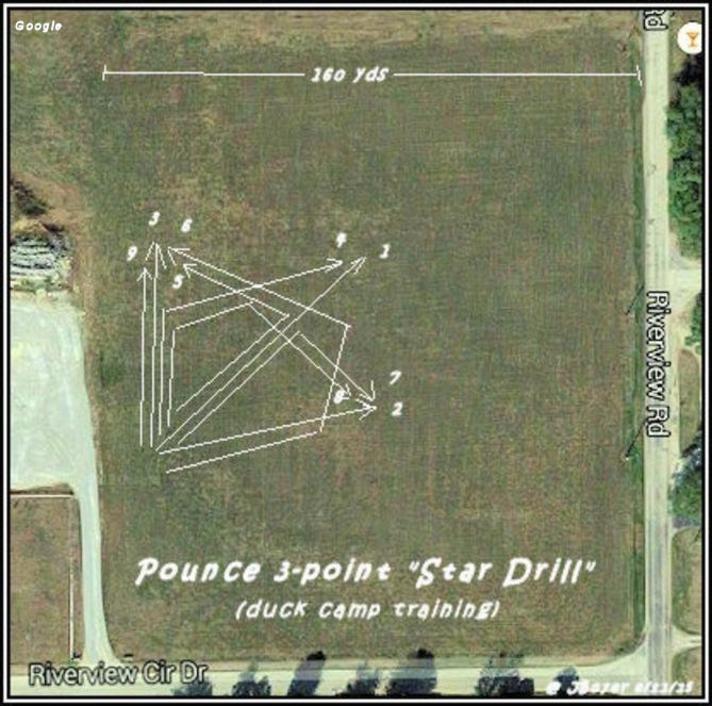 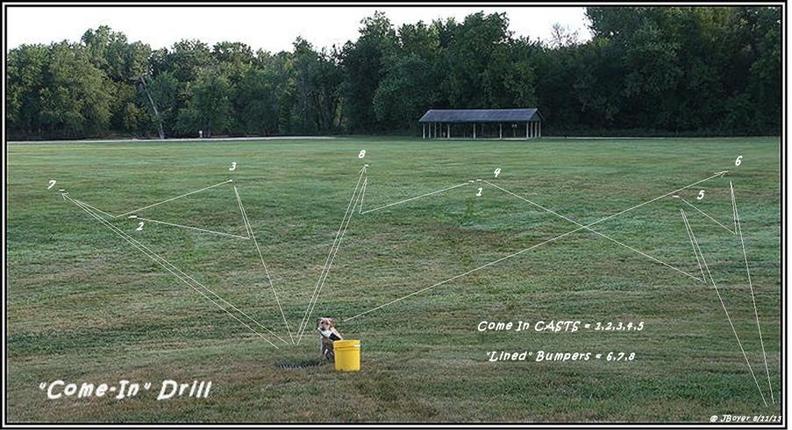 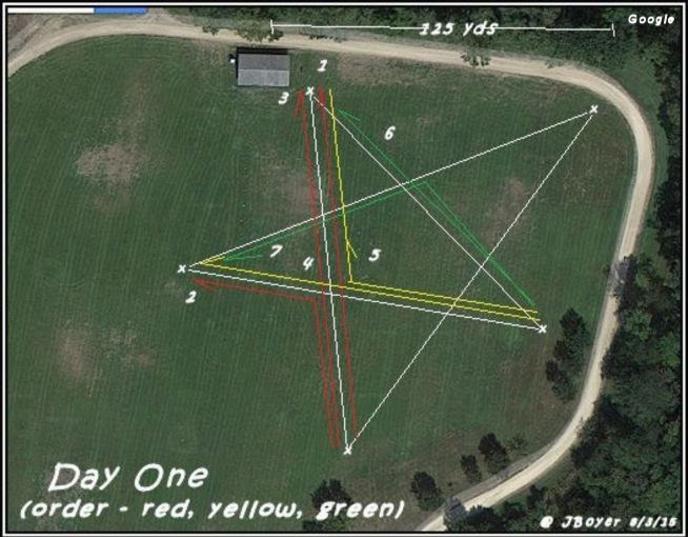 Aug 20 too cool to paint early so Pounce ran a micro version of Hillmann's "Star Drill"...three points instead of five.........she "nailed" it picking up a total of nine retrieves and taking several different literal casts(at duck/fish camp)

Aug 26 trained early at Roscoe Riverside Park DTA and did a full run of the "Star Drill, energy was high start to finish.....she "nailed it"  and will move forward with transition

note: subsequently, the "Star" and "Come-In" drills have become a "Combo"

Aug 9 revisited the "Star Drill" for more handling work
note: started at point three and moved into the field for more options, picked up 12
bumpers total lining 5 piles and casting to 7 others,​ good session
Aug 15  trained early, upper 60's and mostly in the shade of sunrise.....headed for the 90's. Pounce "worked" Hillmann's "Star Drill", mostly in the northeast quadrant, (see Aug 3rd &
9th, 2015  journal entries......find via HOME link below)
note: did two double changes in direction (both were literal) plus several single
changes and three piles were lined, Pounce was sitting quickly, patiently
focused while waiting for the next cast and was precise. Plenty of  speed
throughout the drill and I could see her body kind of give a happy  "shimmy"
on the move when a verbal "good" was given......very cool session had me
smiling (finished for the day)
note: the Hillmann's goal - "She loves the game!"

Pounce's handling needs to be fine tuned to become an automatic reflex. The above photo represents the Hillmann's "Star Drill" used to teach precision handling. Pounce will be working this at least twice a week in August through October. In fundamental terms - practice with many correct "reps" is required.
Phase #1  note: Pounce is fourteen months old
Aug 3, 2015 - established three lines from two of the five points. Pounce was lining like a laser which made it seem almost too simple. However, the drill is NOT about lining. The expectations are to stop on whistle, sit and look for the next cast. The drill is set up to teach handling. Wearing a white coat seems appropriate and Pounce "tore this up" which was fun to watch. After a few, it was all "I get this!" Which means the good "reps" have begun.
note: may need a bigger area to challenge, but this was a good start
note: only handled three times today.......intro went well....wanted to
​                      keep it brief and fun
note: next time....move to the two points on the east side

The Star Handling Drill (base)