Feb 28 Pounce worked three sets of three singles in an "At The Line Drill". Remote wingers in a pod releasing short marks with "noise" & primer reports. "To the Line" standards were practiced including a holding blind. The first two sets were singles
and the third was a close, tight triple. The focus is on establishing better line standards by doing many correct reps. This setup used the "fake" AKC gun and it was a good reference point to begin with. The rationale is correct practice repeats the expectation.
note: The full session covers "from the van to the line (and back)".
note: trained in the "grassy area" at Thorson Pond DTA

Feb 18 trained at the Winnebago Co. DTA - temps in the upper 60's and discovered water in the small technical pond....in February???.....but first Pounce did the "Pin-Point" Marking drill  and was very sharp. Daisy got in her turn of exercise with Pounce getting a "breather", set-up an AKC Senior "Walk-Up" double with a blind on the pond. Wingers were loaded with mallards and the blind was tight "up the middle".........walk-up was excellent with "a duck in the air sit" standard and did not move "anything" (except her head) as we swung to the second mallard. Now all we need are consistent "reps"....picked up and drove to "The New Place" to see if there is a mud issue at the entrance........parked just inside and Pounce ran four long cold blinds....good day....especially with February water training (that has never happened before)
note: this is a very small pond
note: started practicing with the HRC pump gun and lingering rotator cuff issues
in the left shoulder revealed a weakness and pain. Fired 6 sets of three. They
were "herky-jerky" and painful. (another exercise to the daily pool routine)

Feb 11 Saturday is "Grand Children" Day......up early. Pounce did a "yard work" session.
Basic OB was first (off lead, wearing collar). Ran the two bumper "Wagon Heel" drill working on precision, responsiveness, focus, and proper delivery skills at the line (on both sides)....
afternoon, in the 40's and cloudy.....trained at the Winnebago Co. DTA. Ran Hillmann's "Pin
Point" marking drill in the "Stand Alone/Send Back" mode with a primer pistol. Today would
end the phase of getting her back in gear after the two week+ "sick leave". She was fast and
flew through the session. After a short break, we finished with a set of "three plus three" blinds run from two different "running" lines (100 yards apart forming large triangles).
note: all six blinds had a similar concept - "angles across a road into tall cover"

Feb 1 Pounce has eight more days of medication for the flu treatment to be completed
note: she is not coughing, eating well and active...no complications. Vet
instructions - finish off "doxy" pills.....begin easy exercise in a few days
note: Daisy is now beginning to exhibit the same cough that Pounce had. Vet
instructions - give Daisy what is left over from Pounce's cough "med"
and begin using "doxycycline", but twice a day (double what Pounce had)
Feb 2 Pounce recovered quickly (no need for anymore cough "med") and will soon finish off her "doxy" regimen. Daisy received almost immediate treatment (same "meds" as Pounce). Coughing was tough on her at first, but she is a bit calmer late tonight (which is a good sign at her age).
Feb 3 recovery time for Pounce....close watch on Daisy (slight coughing late afternoon and
a big improvement)....both are eating well and alert
note: drove to Vet to pick up Daisy's "Doxy" prescription (didn't have any in stock
and used some of Pounce's until today)
note: a rubdown along the throat/neck area greatly reduces her coughing reflex...
however, there seems to be nothing to cough up
Feb 4 forecasts for the next 15 days = above freezing, day time temperatures.......amazing
note: refilled the "cough med" prescription for Daisy.....still coughing
note: Pounce began "coughing" Jan. 26th...stopped 31st.....6 days coughing
Feb. 1st-4th no coughing & finishing up "meds"on the 8th
Saturday Feb 5th....after two weeks of not coughing....start back up
using easy, brief walk outdoors on lead Wednesday....brief loose runs on
Thursday and Friday....two short singles Saturday/Sunday....three short
HRC line winger singles on Monday, Tuesday & Wednesday
Feb 5 Daisy is still coughing and Pounce is doing well with no coughing for five days
note: used down time to "map out" Pounce's spring & summer testing schedule
Feb 6 finished Pounce's "Doxy".....continue both "meds" with Daisy
Feb 7 foggy day.....no training, other "issues" (not dog related)
Feb 8  resumed training....brief session at Thorson DTA in the "grassy area"
note: loose walk around the area followed by a four bumper Wagon Wheel,
"amped" and no coughing......"temp" in the middle 20's and cloudy
note: Daisy's coughing appears to be almost over (only in the morning)
Feb 9 train, in the 20's, two short Y-Drills (six "stand alone/send backs") and  a cold blind
up the middle at the "Drainage Ditch" DTA (exercise because of time off)...did indoor OB
note: 3 months 'til testing season begins - AKC Senior....Wilmington, Illinois
note: OB sessions every day
note: Daisy was coughing this morning......9th day

Feb 27 Pounce did two remote winger AKC "Walk-ups" with mallards and an "HRC line" double with two blinds and played the GunzUp CD......Daisy "helped" pickup afterwards (for exercise)....pleasant day for February (sunny in the upper 40's)...at the "New Place".
note: Marks and blinds were excellent.....AKC line OB was very good. The
HRC line with the popper gun is "work in progress. Dealing with the
remote and shooting with a weak left shoulder is screwing up my
focus and timing.....practice.....and more practice.

Feb 20 trained at Winnebago Co DTA (again).....1st ran the Three Pile Come-in Lining and Casting Drill. Next, Daisy was exercised (giving Pounce a short break). Then she did nine short, cheating singles (stand alone/walking) from different positions around the small pond.
note: Most all were lunging water (pond is very low)....used a primer pistol and Dokken.
note: refer to Feb 10th for a photo example of the "lining/casting" drill

Feb 12 trained at the Stoughton FT grounds.......set up two different KRDs (Key Relationship Drill - one mark and four concept blinds) - "beyond the AOF", "under the arc", "tight behind the gunner" and "wide of the gunner" (did not do "through the AOF")
note: first setup was a warm-up, short KRD.....did just OK. Did forget to bring the
e-collar....but don't think that was it....the second KRD was "longer/wider"
and run by a "different dog". She was sharp. All the blinds were 165+ yards,
three required only two or three whistles and she lined the one "under the
arc"..... apparently, the first KRD was more of a "rust remover"
note: distance will not be an issue running hunt tests
note: the drive home seemed shorter....... a good session does that
note: temperature low 40's, warm for February, but the wind was 25 mph
note: camera provided photos, but the second set had an exposure issue.....?

Feb 14 trained afternoon at the Square Pond DTA...setup designed to focus on AKC line expectations....three "Gunner's Up" Wingers and a "Zinger" Uplander loaded with mallards in a pod behind two "hiding" blinds with an AKC line 40 yards away (long walk to the holding blind then to the line for each single), reloaded & repeated a second set of four singles
note: focus was on precision & no motion at the line plus holding blind "rules"
note: excellent effort from Pounce.....being smart and responsive are huge pluses
note: "duck quacks & beeper announcements", primer reports & "mallards in face"
had her very "energized"
Feb 15 day off
Feb 16 repeated the Feb 14 setup with the last two mallards as a double. The line sequence was simplified and Pounce showed improvement. Later in the day, received some useful advice on how to more effectively "mark" the desired expectation.
note: Daisy got in some exercise.......it's been awhile....she has been sick
Feb 17 in the 60's....warm enough to work in shirt sleeves, cut out a wooden, fake AKC

training gun and gave it the first coat of "camo" paint....."It's cool to not be cool!"

Feb 23-5 three days off, after seven straight days of training, cold & windy with rain/snow
note: Feb 25th at 9pm it is 21°F with a wind chill of 6°F and snow cover
Feb 26 trained at the "New Place" and with plenty of trees, wind conditions were better than being in a wide open terrain......Pounce ran a 50 yard diameter, two-tiered wagon wheel with 3" orange bumpers on the inner circle and "camo" canvass bumpers on the outer..."did " the outer ring twice while alternating from left to right heeling positions...fast and accurate (mostly). Put Pounce "up" and ran Daisy on some short, stand alone singles for exercise. Pounce was rested and ready for the nine walking singles session. She was fast, accurate and "laser like" on each mark. Training her is an "easy, fun game".
note: Nine singles may seem like a lot in terms of distance, but there are no
returns plus short "breathers" while the "trainer, gunner/thrower" is
walking to the next "station".

Feb 10 trained at the Thorson Pond DTA in the "grassy area" - Pounce ran a short version of the "three pile split lining/casting" drill mostly for exercise (getting back in shape after flu)
note: stiff south breeze and in the upper 30's
note: Daisy no coughing today

Feb 19 trained at the Winnebago Co DTA (two days in a row) - setup two remote winger doubles "Flip-Flop" so as to run land and water. Each setup included three cold blinds. This was a first in that never before was February water suitable for training. It was "balmy".
note: had some issues with one winger, but Pounce was not phased by the delay.
note: Daisy did her third day of exercise and appears fully recovered from the flu.

Feb 13 trained at the Winnebago Co DTA....two setups with three remote wingers and a blind (mallards) and ran from two different lines..."Flip-Flop" (just moved winger "hiding" blinds)
note: Pounce marked well (kind of easy though) and ran two nice blinds, a little
"over the top" at the line. It's been awhile since mallards and HRC "action".
note: Daisy finished off the "Doxy" meds......and not coughing

Feb 21 trained again at the Winnebago Co DTA......the weather will soon return to "normal",
However. the warm spell has provided a great opportunity for water work. Pounce ran a short "schooled" triple with three blinds (remote wingers, mallards, AKC line and the GunzUp CD)
note: slight breeze, upper 60's with sunshine....very comfortable
note: after everything was picked up Daisy ran some alternating, short singles with
Pounce (another dog and honoring) 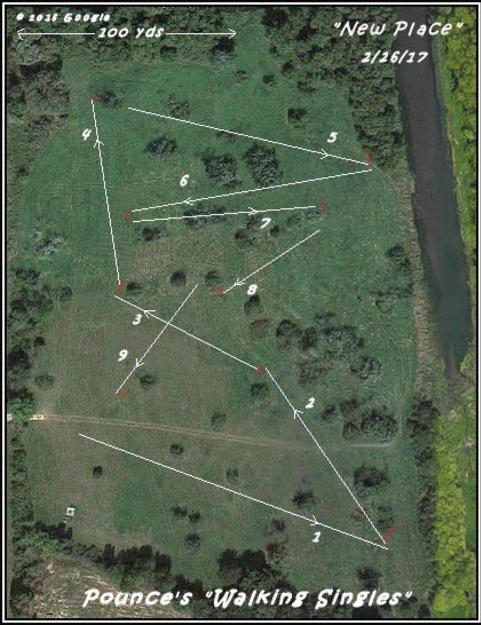 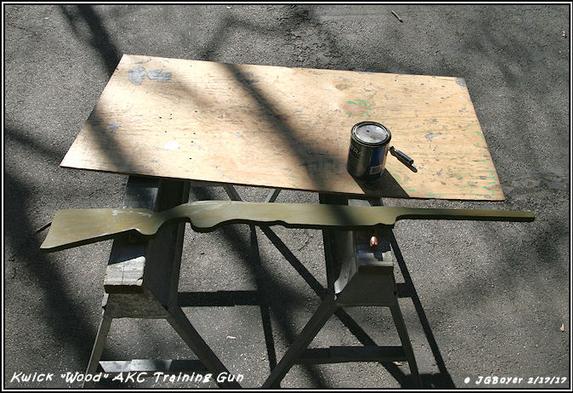 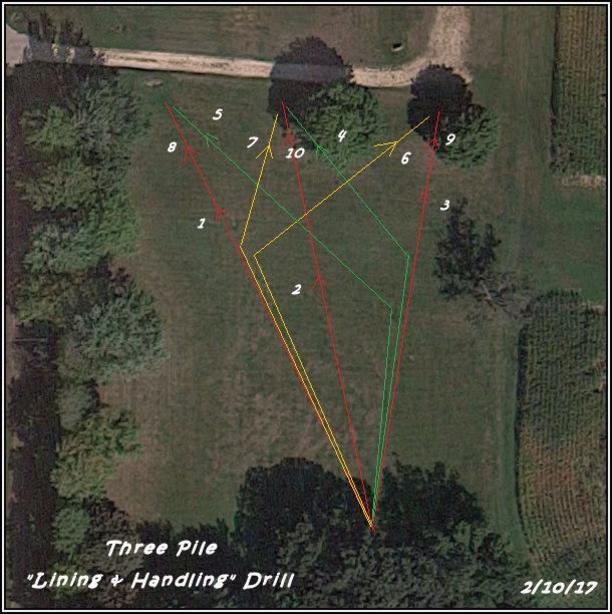 Feb 22 forecast is 70°F.....then rain and colder...trained at the "pond" (again)......first did a set of three remote winger "walk-ups" with mallards....second worked on staying in the water the full length of the channel in the middle (see yesterday's channel photo)...then ran a second set of the three "walk-ups"......excellent session & with colder weather back again tomorrow the timing is ideal for a day (or two) off.
note: Pounce began the frequent "peeing episodes" that were a precursor to
her last March heat cycle (it would be perfect to get that out of the way).