In addition, a "strong" mentor has been invaluable. Thank you, Jim Wegner.

Most recently, in the following link there are two "source" links that after many years finally make sense. 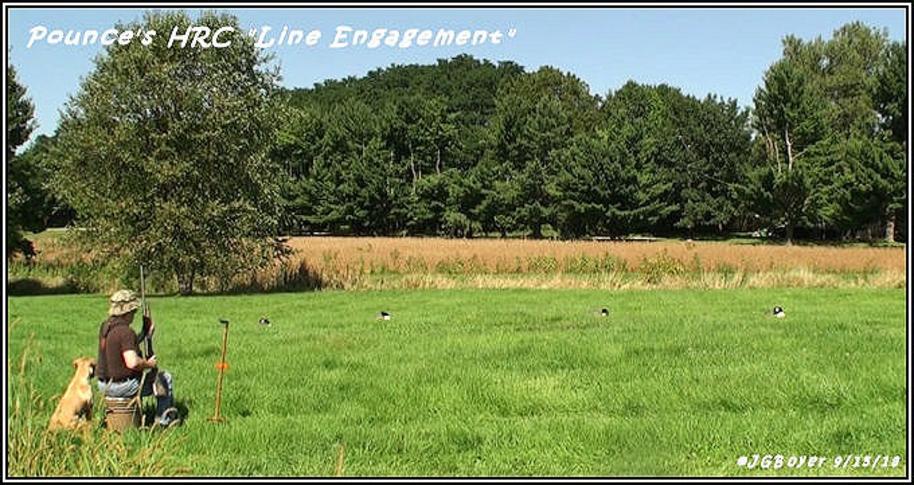 Disclaimer: I have only trained five retrievers in the last twenty years. None were "washed out". I am finally at a stage where it is all beginning to make sense.The key to success it two fold. The first is to recognize what a mistake looks like before making it.  The second is to strive for exciting, perfect practice that is rewarding. The end result is a reflection of the conditioned responses in place.

Other useful links related to trainer/retriever relationships are listed on the following page.

The most effective modification process is gained by "working" through the following two links...first.

"Responsiveness Is A Two-Way Street"

The purpose of this training analysis is to "link" several facets of Pounce's training and performance with the Hillmann process. The first step was to find a relatively brief description of what that means  within the "framework" of one retriever and her trainer. She is/was an "empty vessel" and her trainer is old and "full of it". Somehow they had to reach a common bond between two responsive team players.

I enjoy using analogies to define the moment. In this situation, it is derived from the game of basketball. KwickLabs is the point guard and Pounce is my shooting guard. We practice, train and work together regularly. Each knows the other well and understands where they are supposed to be and what to do so as to maximize our "team like" performance. If something does not go as well as expected, the process is remedied and practiced. When practice is done correctly this leads to an improved, predictable performance. To repeat, when things do not go well, an adjusting process is required....the "point guard" alters the presentation by injecting modifications which improves the performance of our "shooting guard". The above is so easy to say.....but not simple to implement if teaching is not the primary tactic in the process. In another perspective, it is not like this issue has never been discussed. The following are several links to Internet sources and previous pages in this Website. The most useful "information" in the last few years has been.......

After wading through all of the above, the time frame of this analysis began a few months ago when Pounce and I failed two AKC Master tests in a row. Obviously, we were not on the same page. Several months were spent working on Hillmann's heeling program. Apparently, the last stage was where the
"wheels fell off". This was the "distraction" phase. Pounce is extremely aware of everything around her.
Isolating "stuff" did not seem to make any difference. In and out of holding blinds seemed simple, but for Pounce, consistency was elusive. To repeat...at the end of Hillmann's heeling program, the next phase was learning how to introduce and deal with distractions.

This distraction "concept" had no defined structure, plan or focus. Training was routinely doing setups that looked more like testing skills and focused on concepts. Engagement seemed more like an assumption.  The action was "out there" for Pounce while focus and control seemed less important "to her" when at the line. Excitement "ruled".....especially, on a walk-up with a pheasant flyer. Pounce is extremely "birdy" with not much consistent focus on anything else. Control was at times non-existent. It was simple to recognize that she was "out of balance" and doing more of the same was only delaying the inevitable.

In a session with my Hillmann mentor, we stood in front of a holding blind and he simply said, "You are loosing her right here!" Well, it isn't like I did not know that, but had no idea about how to rectify the situation. Keep in mind that Hillmann's program is not driven by corrections. To explain the logic of that one must accept the premise that a retriever should have been taught the correct behaviors and practiced them for quite some time before any corrections. Hillmann's approach is driven by being fair.

Well, for a few days I struggled with "what to do next". There is a singular piece of Hillmann's advise that  always works. The trainer must adjust his approach when things are not going well. Add to that, e-collar corrections and/or pressure are not effective "explainers" (that has been para-phrased). Therefore, the only choice left was to return to a better "definition"/exposure to distractions while focusing/developing better engagement (sometimes referred to as responsiveness).

About a week went by and the idea of using the HRC sequence seemed to be a very plausible approach.
A young, inexperience retriever is leashed and wearing a regular collar. Pounce can be sitting beside the trainer (on a bucket) which is a more intimate position (engaged). The trainer can talk and touch the dog while re-enforcing the sit command with slight tugs on the collar. The two of us were simply more "in touch" (immediately). The physical message was, "I am having fun being close with you.....work with me." That relationship was/is more focused. The routine (with the bucket) can be enhanced with various forms of excitement (and distractions) such as "flyers" with real shooting at the line (elevate the action). These exciting, in the field distractions need to be incrementally enriched as training proceeds. Walk-ups were phased in and the process truly became an exercise in building responsiveness.

note: There was to be nothing about doing "a lot of stuff" out there until our "routine" up close was solid.
In the past, I always did HRC first. With Pounce, I did not....and also decided to skip doing any AKC Junior testing.  In retrospect, she (we) really needed a closer and more intimate approach.

Testing season is over now and waterfowl will soon be the "next best thing". Also, this winter Pounce will be doing some upland hunting. There will be plenty of time to organize a plan to work on distraction proofing for next years' test season.  HRC Upland and Finished tests will be first on the menu.

In a recent training forum this comment was posted about club training sessions. "You can run a hunt test scenario using training aids like an e-collar, heeling stick, etc."

There is a caveat (ie. warning or proviso of specific stipulations, conditions or limitations) to that thinking "process". Establishing a standard requires a great deal of precise practice in the face of distractions. The process leads to reliable conditioned responses that prevail. If maintaining standards when "practicing" and training involves regular use of pressure and corrections (ie heeling stick and or e-collar) they become inseparable "components" of the conditioned responses. The results when running a test without a heeling stick and/or e-collar usually reveal the effects of an "altered" set of conditioned responses. Most dogs will naturally recognize the difference and may respond with non-productive, negative behaviors
which in turn become testing issues.

To repeat...the e-collar and heeling stick are not shortcuts for teaching. The expression "training aid" requires training/teaching with well thought sessions with fairness and finesse to the point that in a test (or advanced training) the need for any "aid" decreases.

There is an expression, "If you can't train a dog without an e-collar.....you can't train one with it." There may be some limitations to this, but every year literally thousands of inexperienced trainers effectively learn how to teach OB in AKC training sessions where no heeling stick or e-collar is used.  A major test of the above was begun about a week after the "awakening" and has continued with gradual "adjustments".

The most significant "modification" was Pounce has not worn an e-collar since the first week in August. Two months have gone by. The differences are very obvious and were not difficult to achieve. Mostly because Pounce is sensitive and very intelligent. A well timed "no" is just as effective as a nick with an e-collar. However, either one can be turned into useless "nagging".

Those "improvements" included passing six entry level HRC tests. It was an effective and somewhat seamless strategy in modifying expectations at the line. However, she (we) are not quite "there"...yet.  Precise, appropriate practice "up close" is a process. Failure is a powerful catalyst for change.
to be continued.....Oct., 2018 - into next spring